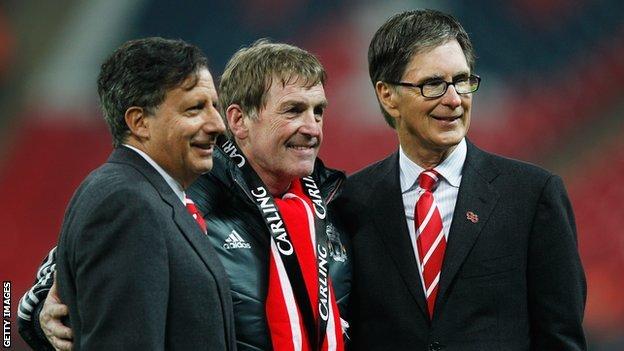 Liverpool's owners are keen for the club's new manager to be in place for at least four to five years, but there is no front-runner at this stage.

Tom Werner and John W Henry have begun the search for the Reds' fourth boss in two years after sacking Kenny Dalglish and have a number of names in mind.

The new boss is likely to get a transfer budget of more than £30m.

Intermediaries acting for the club have spoken with Andre Villas-Boas, but he is unlikely to get the job.

Kenny and the Kop

The Portuguese was sacked by Chelsea in March.

Former Liverpool manager Rafael Benitez is also not thought to be in the running. The Americans are known to have been impressed by Wigan manager Roberto Martinez but no talks have taken place.

Wigan chairman Dave Whelan has often spoken of his admiration for the Anfield club and it is thought he would be willing to grant the Spaniard permission to discuss the post with Henry and Werner.

Dalglish left for Spain on a planned family holiday on Wednesday night. His wife Marina wrote on Twitter: "Really sad day for us a family but we all remain LFC fans. All so proud of Kenny."

On Wednesday, sources close to Henry were keen to stress the American owners do have a clear vision for the future of the club and are likely to appoint three senior directors in the coming weeks.

Meetings have been held with a number of potential directors of football, including Johan Cruyff and former Barcelona sporting director Txiki Begiristain, while they have also spoken to at least one candidate to fill the chief executive's role.

Henry and Werner are also thought to be close to appointing a new director of communications to replace Ian Cotton.

While the departure of Dalglish has left something of a power vacuum at Anfield, FSG felt they had to act given Liverpool's failure to challenge for a Champions League qualifying place, a clear target at the start of the season.

Liverpool's most recent annual report revealed that the club's prolonged absence from the competition had cost the club a minimum of £30m in revenue each year.

While the owners were encouraged by the Carling Cup victory in February, the first silverware since 2006, it could not cover up the failings of a poor Premier League campaign.

Steve Clarke, Dalglish's assistant, has handed in his resignation out of loyalty to the 61-year-old Scot.