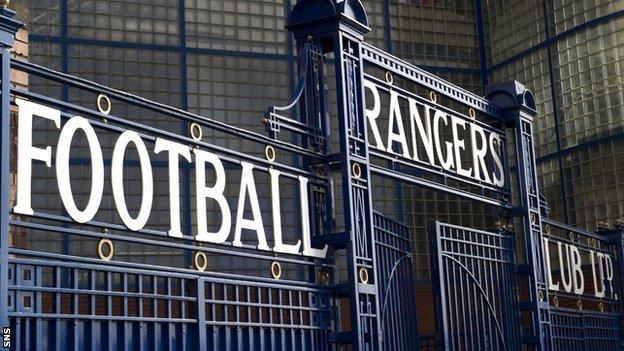 Rangers have had their appeal against a year-long transfer embargo and a £160,000 fine rejected by a Scottish Football Association tribunal.

The SFA had charged the club with six breaches of its rules and banned owner Craig Whyte from Scottish football.

Rangers argued that they should not be held responsible for Whyte's actions.

And administrator Duff & Phelps is hoping to launch a challenge to the transfer embargo, saying it was not a sanction open to the original tribunal.

The decision will not deter the consortium led by former Sheffield United chief executive Charles Green, who had an offer to buy the club accepted on Sunday and who was present at the appeal.

This sanction was proportionate to the breach, dissuasive to others and effective in the context of serious misconduct

"Our group went into the purchase of the club with this sanction in place, but we hoped the decision would at least be commuted," he said.

"We fully support the club as it considers an appeal against this latest decision."

Administrators were called in to Rangers on 14 February after the tax authorities went to court to seek payment of an unpaid bill that had built up since Whyte took charge at Ibrox in May last year.

An SFA disciplinary tribunal imposed the fine and transfer ban on 23 April after charging Rangers and Whyte of bringing the game into disrepute.

Duff & Phelps immediately challenged the decision, saying it could hinder chances of finding a new owner for the club.

The three-man tribunal - Lord Carloway, former Partick Thistle chairman Allan Cowan and Spartans chairman Craig Graham - will give full reasons for rejecting the appeal in writing "in early course", but the SFA issued a summary of its conclusions.

"It was competent for disciplinary tribunal to impose the additional sanction of prohibiting registrations of any new players of 18 years or older for a period of 12 months," it stated.

"The disciplinary tribunal was correct to determine that the conduct involved - especially the deliberate non-payment of very large sums, estimated in excess of £13m of tax in the form of PAYE, NIC and VAT - was attributable to the club as a member of the Scottish FA.

"The disciplinary tribunal was correct also in holding that the maximum fine available for this breach was £100,000 and on its own was inadequate as a punishment for this misconduct. It was therefore correct to select an additional sanction.

"The sanctions available included expulsion from participation in the game and termination or suspension of membership of the Scottish FA, which would have had a similar effect.

"The appellate tribunal observes that serious consideration was given by the disciplinary tribunal to imposing one of these sanctions, which would have had obvious consequences for the survival of the club.

"The disciplinary tribunal rejected these as too severe and this appellate tribunal agrees with that conclusion.

"Although the appellate tribunal has listened carefully to the representations from Rangers FC about the practical effects of the additional sanction, it has concluded that this sanction was proportionate to the breach, dissuasive to others and effective in the context of serious misconduct, bringing the game into disrepute.

"In particular, the appellate tribunal recognises that the disciplinary tribunal decision does not affect Rangers' ability to extend the contracts of existing professional players, including those whose contracts will expire at the end of this season and including also those currently on loan to other clubs.

"The appellate tribunal observes that Rangers FC have over 40 professional players in this category."

A "dismayed" joint administrator, Paul Clark, appeared determined that Rangers will continue to battle against the transfer ban.

"The decision by the appellate tribunal to uphold the sanction, namely the suspension of registration of players for one year, is not competent in the view of the club and its legal advisers," he said.

"Such a sanction was not available to the tribunal and should not have been imposed and it is the intention of the club to challenge the determination.

"The club will consider seeking review of this most disappointing decision and it is a matter of regret that the certainty and finality Rangers sought on this matter has not been achieved."

Sandy Jardine, spokesman for the Rangers Fans Fighting Fund, added: "Rangers supporters will be shocked and bitterly disappointed by this decision and will find it hard to take that the club has been so heavily punished for the actions of individuals."