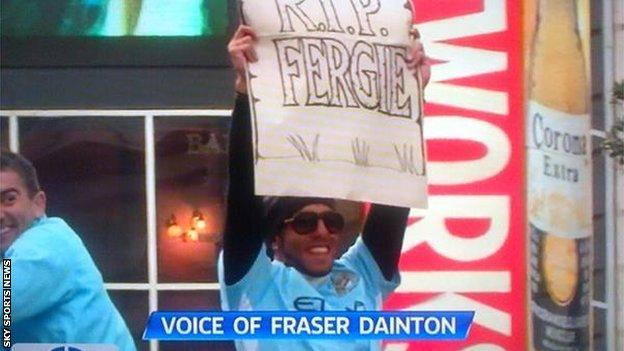 Manchester City's Carlos Tevez says he will not apologise to Sir Alex Ferguson over the 'RIP Fergie' sign he held at City's Premier League title parade.

The Argentine striker's club have already apologised to the Manchester United boss over the incident.

Tevez said: "It seems like Ferguson is the president of England.

"When he speaks badly about a player, nobody says he has to apologise but when someone comes out with a joke, you have to say sorry. I don't say sorry."

Accusing the United manager of having "said the worst about me" in the past, Tevez added: "There's no relationship at all between me and Ferguson."

The comments, made to reporters in Argentina and carried on the Spanish-language website, www.ole.com.ar, appear to contradict the striker's initially contrite response.

Tevez who joined City in 2009 after leaving United, said at the time: "I got carried away in the excitement of the moment and I certainly didn't mean any disrespect to Sir Alex Ferguson, who I admire as a man and a manager."

The sign, passed to the 28-year-old Argentina international by a supporter during Monday's open-top bus parade in Manchester, was thought to refer to a 2009 response by Ferguson, when asked whether United would ever be City's underdogs.

Ferguson had said at the time: "Not in my lifetime".

City apologised for the incident, describing the sign as "tasteless material" and saying Tevez had "made a significant error of judgement" in brandishing it.

United chief executive David Gill applauded the club for the prompt apology, telling Sky Sports News: "It was silly and inappropriate but City acted with commendable speed to say sorry."

After helping them avoid relegation from the Premier League, he moved to United, where he spent two seasons, winning two Premier League trophies and the Champions League.

Tevez was top scorer in each of his first two years at City, but this season was punctuated by a self-imposed spell back in Argentina after an argument with manager Roberto Mancini about his alleged refusal to warm up in a Champions League game with Bayern Munich.

Mancini had said Tevez would not feature for him again but brought him back in for the title run-in.

He impressed on his return to City, scoring four goals in 10 games, and featured in the final-day win over QPR that clinched their maiden Premier League title.

Mancini told BBC Sport this week: "It's not difficult to manage Tevez. He's a good guy. We had a good relationship always.

"I don't know why we had that situation in September but in the end he's a good guy and a fantastic player."

And the striker has now said he could stay at the club months after it looked certain he would never play for City again.