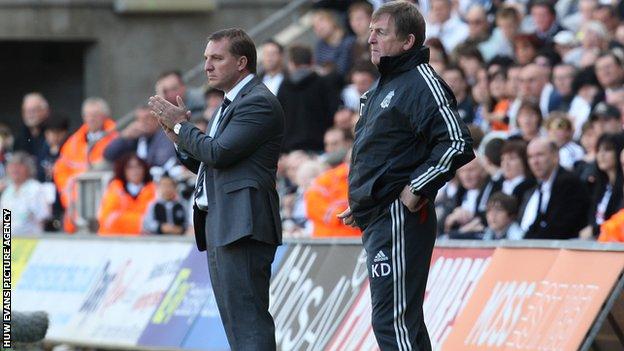 Marcel Desailly believes Brendan Rodgers should stay with Swansea City and that a move to a club like Liverpool would be premature.

Rodgers, the Swansea manager, has emerged as one of the favourites to succeed Kenny Dalglish at Anfield.

But Desailly, a World Cup and European Championship winner with France, has urged Rodgers to continue his work at the Liberty Stadium.

"I feel it's a bit early for him right now [to join Liverpool]," he said.

Swansea finished in 11th place and earned the respect of pundits and fans in their first season in the Premier League.

Desailly, who captained Chelsea during his six-year spell at Stamford Bridge and picked up one major trophy when he lifted the FA Cup in 2000, has urged Rodgers to finish what he has started at the south Wales club.

But the Frenchman believes the ambitious manager will leave if Liverpool come calling.

"You cannot just go away and forget about a huge commitment he has made and what he has done for Swansea," Desailly told BBC Wales Sport.

"You have to cross your fingers, but technically if Liverpool ask him, he will go. You cannot keep him.

"The potential is there in Swansea and it's a shame to leave your baby on the street. He should hand it to somebody who will look after him before he moves on."

Despite having only four years experience as a manager, and only one season in the Premier League behind him, Rodgers has already been tipped to manage a "top four" club.

And Desailly, the 116-times capped former French captain and Champions League winner with AC Milan, believes Rodgers deserves to be a contender to manage Liverpool.

"I am not suprised, but there are other names there also," Desailly added.

"If he has a long-term perspective, he should stay in Swansea, because of the work he has done there."