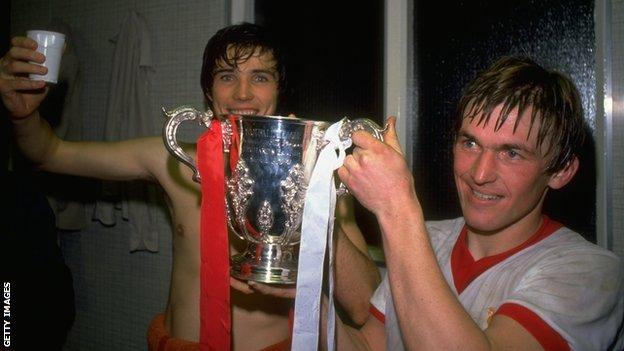 Dalglish was dismissed after one full season in his second spell at Liverpool in which they won the Carling Cup and finished eighth in the Premier League.

Hansen believes Liverpool owners Fenway Sports Group "need to act swiftly to quell any further discontent from supporters and prevent the possibility of an exodus of their better players".

He added: "The next manager will be the fourth in two years for Liverpool. You are getting into the realms of Chelsea with all the chopping and changing, so it is a very big decision for them and they need to do it quickly."

Hansen insists Dalglish's record last season should have been enough to guarantee the 61-year-old at least another year at Anfield and believes there was genuine cause for optimism about further improvement for the future.

Hansen told BBC Sport: "Kenny will be shocked and distraught because he loved Liverpool Football Club and their supporters. Just walking through the door at Anfield gave him an extra spring in his step and he will feel fragile today about not being able to do that again as manager.

"And as his friend I know how much he put into the job. Even when he went back to work at the academy before becoming the manager again he put his heart and soul into it. I'd ring him for a chat on a Sunday and he would be down there. He just loved being at Liverpool.

"He was so enthusiastic about working with those kids and what he could pass on to them and how he could improve them and nobody could have worked harder when he was manager because he loved Liverpool so much."

Hansen added: "The American owners have set the bar high by sacking him because they are saying only the Champions League matters. This is increasingly true but you have to remember where Liverpool were when he came back. If you went into Anfield in January 2011 it was the worst it had been in 30 years - the club was on its knees, so you were not going to get straight back into the Champions League."

Dalglish's signings have been criticised but Hansen insists there was enough evidence to suggest they would flourish under his fellow Scot had he stayed.

"No-one would suggest all of Kenny's signings have been rip-roaring successes", said Hansen. "But I still think Jordan Henderson will develop into a very fine player and Roy Hodgson saw fit to include Andy Carroll and Stewart Downing in his Euro 2012 squad.

"I believe Kenny should still have been the manager at the start of next season and I also think Liverpool supporters were pretty optimistic things would improve under him next season."

"He means so much to this football club, but at the same time, we all have the duty to do what is in the best, long-term interest of the football club. It was time to make a change and we move forward," he said.

"There has been a lot of talk about the club being in a crisis because of people leaving, but we have a plan, we've always had a plan. It takes time.

"Appointing a manager is a process. You can't put a timescale on it.

"We haven't made any contact with anyone yet, but we have had plenty of contact. There has been lots of interest immediately after Kenny went out."