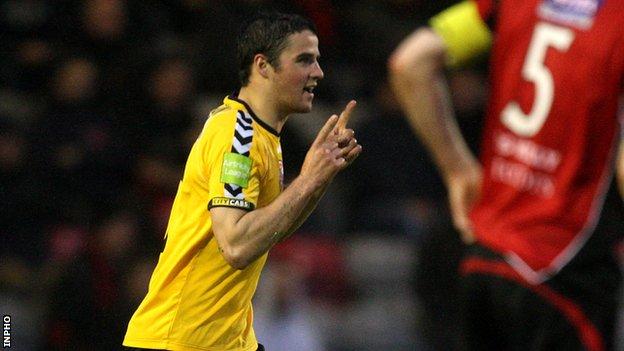 Chances were few and far between in the first half with Patrick McEleney going closest with a long-range effort.

Former Derry favourite James McClean and another Republic of Ireland Euro 2012 squad member David Forde were both in the crowd to watch their former Brandywell club in action and the spectators also included Irish President Michael D Higgins.

However, the dignitaries and other watchers had little to get excited about in the first half.

McEleney fired just wide from 25 yards in the 10th minute while Ruaidhri Higgins shot over on the stroke of half-time.

Bohs improved after the break with John O'Connor having a half-chance blocked on 50 and Ward wasting a great opportunity when firing at Gerard Doherty five minutes later.

Bohs manager Aaron Callaghan was sent to the stands following the goal after remonstrating with the match officials.

Callaghan appeared to be furious at not being allowed to make a substitution after the awarding of the free-kick which led to the Derry goal.

Derry were well on their way to three points as McEleney lashed home his spot-kick on 78 minutes following a Bohs handball in the box.

Ward pulled back a goal for the home side in the third minute of injury-time but Derry held on to claim the points as they continued their impressive recovery from last weekend's Setanta Sports Cup final heartbreak against Crusaders.