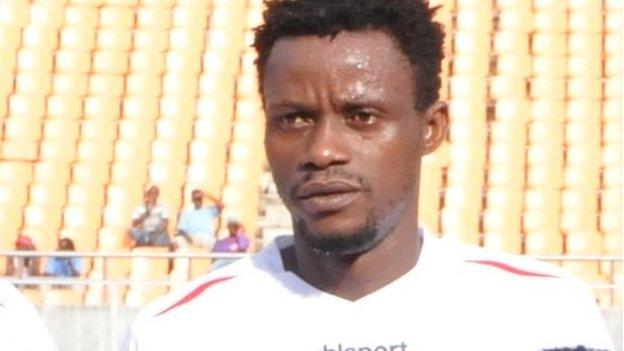 Rwandan football is mourning the loss of international Patrick Mafisango, 32.

Mafisango, part of Rwanda's squad for next month's 2014 World Cup qualifier against Algeria, died in a car accident on Thursday morning in Dar es Salaam.

The midfielder played for Tanzanian champions Simba and had just returned from Sudan, where his side lost a Confederation Cup match this weekend.

"It is very sad for all of us - we are devastated," Rwanda coach Milutin 'Micho' Sredrojevic told BBC Sport.

Disbelief, shock and devastation have hit us

"This is a player who had a future for the national team and his career as well.

"He has played six games for Simba in the Confederation Cup so is a player who could have been great value to our team," added the Serb.

Mafisango died in the small hours of Thursday morning in an accident involving a motorcycle, as the car he was driving veered off the road and crashed into a trench.

The holding midfielder, the third top scorer in Tanzania this season with 12 goals, was called up by Rwanda coach Sredrojevic for June's 2014 World Cup qualifiers.

This marked his international return after a year on the sidelines, having fallen out with former head coach Sellas Tetteh.

"When a player from a defensive midfield position scores 11 goals in the league and becomes the best scorer in the Tanzanian league - and plays very well in the Confederation Cup - then he has called himself into the national team," added Sredrojevic.

The Wasps travel to Algeria on the weekend of 2-3 June for their opening Group H tie, before hosting Benin the following weekend.

Mafisango, who Sredrojevic says was attracing interest from a Dutch club in recent days, was born in DR Congo and played for TP Mazembe before joining Rwandan giants APR FC.

A man nicknamed 'Patriot' also played for Atraco of Rwanda and Tanzania's Azam before joining Simba, who lost their Confederation Cup match to Al Ahly Shandy in Sudan on penalties this weekend.

Sredrojevic's newly-named team is due to assemble on Friday to prepare for their World Cup qualifier in Algeria, and the coach says Mafisango will be uppermost in his squad's thoughts over the next month.

"We have lost him but we still need to keep him in our memories and - with the quality of our hard work, performance and results - to evoke the memories of him."