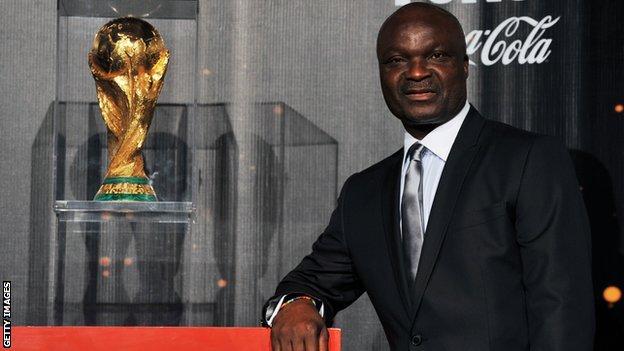 The 1990 World Cup star set up a group last month calling for the axing of the executive committee of the Cameroonian Federation (Fecafoot).

Milla has criticised Fecafoot for the Indomitable Lions' dwindling fortunes and lengthy ban for Samuel Eto'o.

"I've been waiting for this for a very long time now," said Milla, 59.

The decision to sack Milla was made at Wednesday's general assembly meeting of Fecafoot in Yaounde, where support was expressed for long-serving president Mohamed Iya.

Milla was made honorary president of Fecafoot in March 2008.

Accused of "injurious utterances against Fecafoot, its president and management staff", Milla has often clashed with Cameroon's football authorities, accusing them of hindering progress.

Undeterred by Wednesday's decision, he has pledged to continue his campaign to remove the Fecafoot leadership.

"I've got to tell you that we're continuing our fight to get the present management of Fecafoot out of office," Milla told Associated Press.

"This decision by Fecafoot doesn't hurt me in the least. I was not an employee of Fecafoot. I was simply providing a helping hand to them to see that our country's football gets sanity."

The 1987 African Footballer of the Year's criticism of Fecafoot came to the fore after Eto'o was banned for 15 matches for his role in last year's players' strike over unpaid bonuses.

The four-time African Footballer of the Year, who currently plays in Russia, will miss the World Cup qualifiers against Congo and Libya on 2 June and 10 June respectively.

The following weekend, the Indomitable Lions must once again do without their biggest star of recent times, as they host Guinea-Bissau in a 2013 Africa Cup of Nations tie.

Denis Lavagne's side lead 1-0 from the first leg in February, as they try to return to a competition they missed out on earlier this year.

The Indomitable Lions' absence from the 2012 Nations Cup was particularly disappointing for their fans, with Cameroon bordering both the countries that co-hosted the finals - Equatorial Guinea and Gabon.

Cameroon have participated at five of the last six World Cups but have won just one of their last twelve games at the tournament, when beating Saudi Arabia 1-0 at the 2002 finals in Japan and South Korea.

The Indomitable Lions were ranked as Fifa's 66th best team in February this year - their lowest rating since the world governing body began its classification in 1993.

Milla shot to prominence at the 1990 World Cup when his four goals propelled Cameroon to the quarter-finals, before extending his record as the World Cup's oldest scorer in 1994, netting against Russia aged 42.