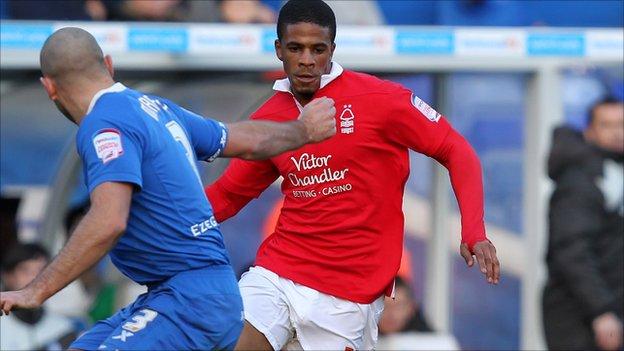 As birthday presents go, signing for a Premier League club is not a bad one.

Just five years ago, Garath McCleary was playing non-league football, but the winger celebrated his 25th birthday by signing for Premier League Reading.

The deal was announced on Wednesday and the ex-Nottingham Forest man can now look forward to life in the top flight.

"It was the best birthday present I could ask for. It was a brilliant surprise for me," McCleary told BBC Radio Berkshire.

McCleary spent time with Oxford United as a youngster before dropping down into non-league football, but he was given his big break in 2008 when he was signed by Forest.

Who is Garath McCleary?

It took the winger time to find his feet, but has just enjoyed his breakthrough season, scoring nine goals in 23 games, including four in one match against Leeds.

His impressive form towards the end of the season helped keep Forest in the Championship, and with his contract coming to an end, the suitors soon came calling.

Reading were first to show an interest, and despite a late bid from another high-profile club, the Madejski Stadium was always going to be his likely destination.

"Reading showed their intent early and to work with a manager like Brian McDermott will be fantastic for me," added McCleary.

"They play with wingers so that suits me. I know there will be competition for places but you need that in the Premier League."

Competition there will be, most notably from Jimmy Kebe on the right wing, but McCleary says he cannot wait to get started.

"Coming from non-league at the age of 20, you don't really think of playing in the Premier League, but I always dreamt of it as a little boy and to finally make it happen, I can't really put into words," he said.

"It's a fantastic achievement for me. It was good to keep Forest up but to come to a club like Reading who are now in the Premier League is fantastic for me. I can't wait to get started."

McCleary learned the good news on his big day on Tuesday - and in the most unlikely of places.

"I was on the flight back from Las Vegas," he revealed. "I got picked up at the airport and taken to the Mad Stad and that was it.

"It's the stuff dreams are made of. I just want to get cracking and showcase my talent. I know there will be a lot of competition but hopefully I can show people what I've got."