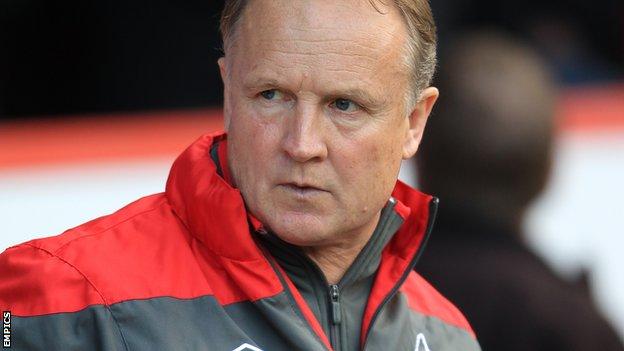 The Sussex outfit will play in League One next season after securing back-to-back promotions.

"If I can get the team playing like some of my teams in the past, I'll be delighted. If we get that, we can achieve whatever we want.

"I think the club is a good fit for me and I can move the club forward in the right way, " he told BBC Sussex.

"Ambitions are sky high, like they should be. Expectations should be realistic."

The former Bournemouth and Doncaster Rovers manager took up the vacant post at Crawley this week after he leaving a coaching position with Nottingham Forest.

O'Driscoll has signed a rolling one-year contract, a deal he believes is best for all parties involved.

"I think everybody knows where they stand with that," the 54-year-old said.

"If you sign a termed contract it breeds uncertainty in the final 18 months or year. With this, everyone knows where you are in the whole scheme of things from day one. I prefer that, to be honest."

O'Driscoll is keen to bring Richard O'Kelly, his former assistant at Doncaster, to the Broadfield Stadium.

O'Kelly is currently without a club after leaving his post as manager of Hereford United last week following their relegation to the Blue Square Bet Premier.

"I think I've got the mandate to bring in one member of staff. Would I like him? Definitely," O'Driscoll added.

"Would he come? Richard is his own man and will make his own decisions - but I think it would be a good appointment for the football club."