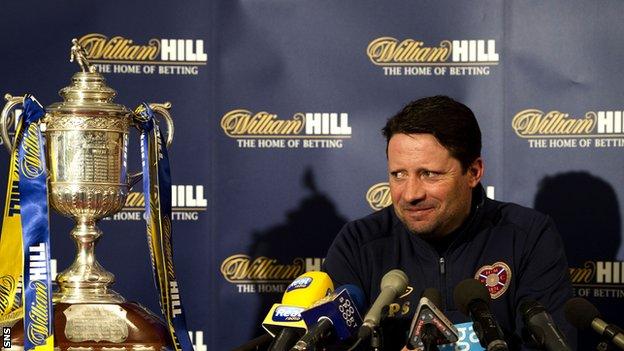 While supporters of the Edinburgh rivals are gripped by Cup final fever, Sergio aims to keep his squad calm ahead of the Hampden clash.

"For me it's an opponent, it's a game that I want to win like all the others," he said.

"It's not special because it's Hibs."

If we didn't beat Auchinleck, we wouldn't be here to play this one

It is the first time the two Edinburgh clubs have met in the Scottish Cup final since 1896, with Hibs are looking to end a 110-year wait to lift the trophy.

However, Sergio said guiding Hearts to Saturday's final at Hampden was crucial to his side's hopes of silverware.

He added: "This is a game that is as important as it was to win against Auchinleck (Talbot, Hearts' fourth-round opponents).

"If we didn't beat Auchinleck, we would not be here to play this one."

Sergio has picked his starting line-up but has yet to confirm whether striker Craig Beattie will feature.

"We're going to see and take a decision if he is fit enough to deserve to be in the squad," the Hearts boss added.