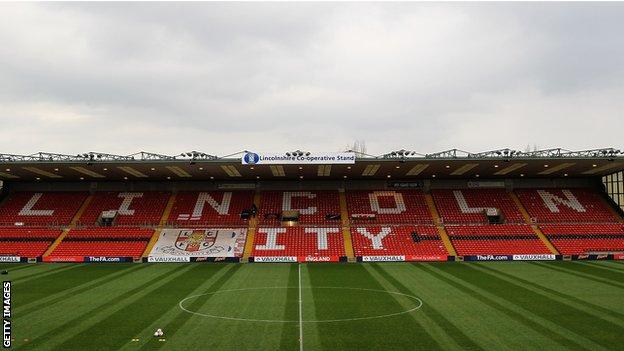 Lincoln City have offered supporters the chance to rename the club's Sincil Bank stadium for £50 as they aim to boost the club's finances.

Fans can enter a prize draw and the winner will receive a package worth over £50,000, including naming rights.

All money raised from the draw will go towards boss David Holdsworth's squad.

"The whole point of this is to raise extra money," he added.

"We've been looking at several different innovative ways to raise money to increase the budget so David can put together the strongest possible squad."

Holdsworth, who guided the Imps to 17th in the Blue Square Bet Premier table, revealed last month he was worried about losing some of the club's leading players because of uncertainty about their finances.

Prescott is hopeful of raising a significant amount of money from the draw, which closes on 27 July at 12:00 BST.

"If an individual wins, it might be a really nice way to commemorate a loved one.

"It might appeal to some supporters who actually don't want to change the name and want to keep it as Sincil Bank. If they buy a ticket and win, they've got an option to leave the stadium name as it is," he added.

Relegated Blue Square Bet Premier side Bath City held a similar draw last month and they raised £8,350 for the club, whose ground will be known as the Mayday Trust Park next season.