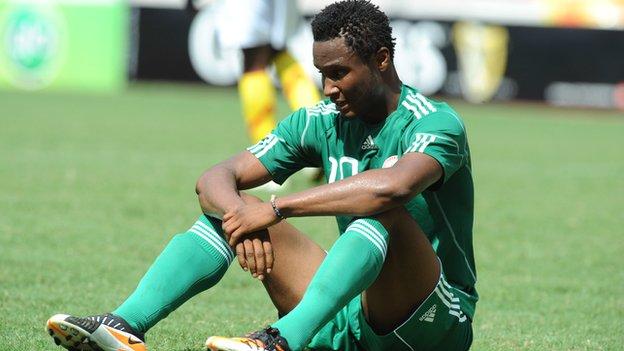 Nigeria have left Premier League stars John Obi Mikel, Taye Taiwo and Peter Odemwingie out of their squad for next month's series of qualifiers.

The Super Eagles open their 2014 World Cup campaign against Namibia and Malawi, before hosting Rwanda in a 2013 Africa Cup of Nations tie.

Mikel has yet to play for Nigeria since Keshi took charge in November.

"Mikel is in my plans but we will give other players an opportunity as well," said Keshi on Thursday.

"We need to give players from the local league a chance. After all, how many knew about such players as Uche Kalu, Ejike Uzoenyi or Godfrey Oboabona before now?"

Mikel's situation is unusual since a midfielder who could start Saturday's Uefa Champions League final against Bayern Munich in Germany has not made his national squad for World Cup and Nations Cup qualifiers.

The 25-year-old, who played every minute of Chelsea's semi-final victory over Barcelona, has already won the FA Cup with the Blues this season.

Although he cuts a divisive figure in Nigeria, where some fans believe his international performances do not match those for his club, Keshi does not rule out a return in future.

"The door is not closed on anyone," Keshi told BBC Sport.

"We should focus on preparation instead of those who didn't make the squad."

In-form Montpellier winger Utaka is making his first return to the Super Eagles squad since the team's first-round exit at the 2010 World Cup in South Africa.

"Utaka, Aluko and Elderson have been in great form for their clubs and we are confident they'll translate their club form to the national side," added the captain of Nigeria's 1982 Nations Cup-winning side.

Nigeria will name another squad of 18 players from the domestic league, who are due to fly out this weekend for a friendly in Peru.

The Super Eagles host Namibia on 3 June in Calabar, before travelling to Malawi the following weekend for another qualifier.

On the weekend of 15-17 June, Nigeria entertain Rwanda as the sides contest the second leg of a first round Nations Cup tie, whose opening tie ended goalless in February.

Keshi was appointed coach of Nigeria after previous incumbent Samson Siasia failed to qualify for the 2012 Nations Cup.

Overseas-based players called up by Nigeria