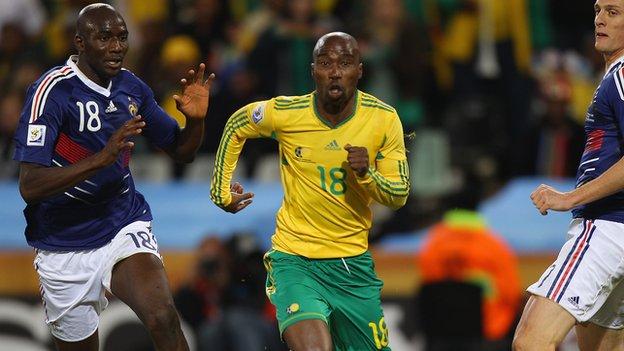 Coach Pitso Mosimane has turned to the 34-year-old striker to solve a long-running goalscoring problem.

Bafana Bafana's failure to qualify for the 2012 Africa Cup of Nations largely stemmed from registering just four goals from their six qualifiers.

Nomvethe has represented South Africa at both the 2002 and 2010 World Cups.

At this point in time, the key is to win the game and not focus on playing very well. The country deserves a win

"Siyabonga fits our criteria and the way we play," Mosimane told a news conference on Thursday.

"He has discipline, respects the national shirt and is always willing to assist us," he said of a man who has won 79 caps, scoring 16 times.

Despite his age, Nomvethere is the leading scorer in South Africa's Premier Soccer League, having netted 20 goals for Moroka Swallows.

And Mosimane hopes the man who scored the match-winner against Slovakia at the 2002 World Cup can deliver again in qualifiers at home to Ethiopia on 3 June and against Botswana in Gaborone six days later.

"Ethiopia is a very and stubborn team that doesn't give up and give in to pressure," said Mosimane.

"They have a very quick team up front and a very compact in defence, but we think we have the ammunition and the players to unlock this ultra-defensive approach."

"The coach called me and I am happy to be back," said Nomvethe about his return. "I still have a desire to help the national team as they have not been winning."

Steven Pienaar captains the 26-man squad, which will be reduced in the run-up to next month's games.

South Africa have no Africa Cup of Nations qualifiers this year since the country qualifies automatically as the hosts of next year's finals.