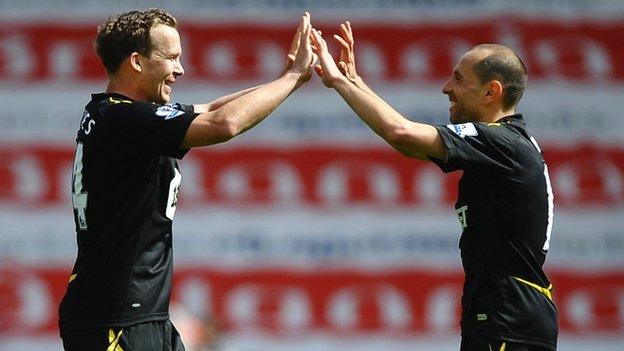 Former Bolton midfielder Stelios Giannakopoulos has called on the club's out-of-contract players to secure an immediate return to the Premier League.

Owen Coyle's side ended an 11-year stay in the top flight after they drew with Stoke on the final day of the season.

And there are several players who have come to the end of their current deals.

"This is the time you show you have a true love for the club to stay for a year in the Championship and bounce back," Giannakopoulos told BBC Sport.

"That will be a big achievement for the big players such as Kevin Davies, Jussi Jaaskelainen and Ricardo Gardner.

Skipper Davies, 35, has already said he is "pretty sure" he will be at the Reebok next season.

But others, including Martin Petrov, Ivan Klasnic, Zat Knight, Paul Robinson and Gretar Steinsson, are free agents this summer.

Bolton chairman Phil Gartside has suggested that some of the players are likely to leave as the club looks to reduce its costs.

He said: "The players that are out of contract this year are mostly senior pros, which means they are, more than likely, the higher-paid ones.

"We'll be able to reduce our wage bill significantly next year by as much as 50%."

Giannakopoulos played for Bolton from 2003 to 2008 and was released by the club after the Trotters survived relegation by a point.

He is now president of the Greek Professional Footballers' Association and is continuing plans for a coaching career by taking his Uefa Pro Licence.

Asked if he would consider a move to the Premier League, he said: "Why not? I would be available for any serious proposal that contains either the national team or a football team abroad."