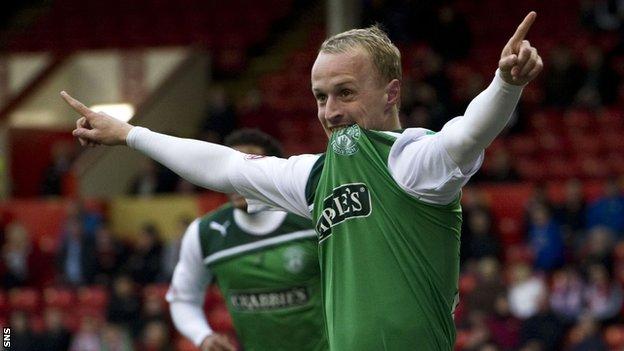 Striker Leigh Griffiths says firing Hibs to a Scottish Cup final victory would be the pinnacle of his career.

The on-loan Wolves striker scored the winner in the semi-final against Aberdeen and aims to emulate that feat.

"I missed the birth of my two kids so this could be the proudest moment of my career," he told Hibs TV.

"If I could score the winner or play any part in the winner it would be the proudest moment of my life."

Boyhood Hibs fan Griffiths, 21, said the squad had benefited from a training camp near Dublin.

"Training was good as well, the training pitch was great and to train on that for a few days without the press and everyone on our backs was great."

Griffiths said such was demand for tickets for Saturday's game at Hampden that he was being contacted all the time by hopeful supporters.

"My phone is still going for tickets but all mine are away," he added.

"I have to collect two now but they are going straight to my big brother and after that there are no tickets."