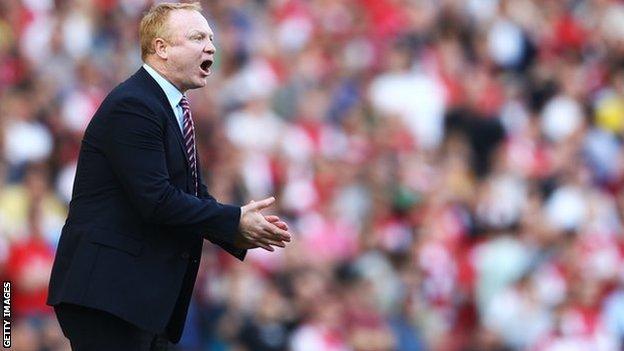 Sacked Aston Villa manager Alex McLeish has offered a response to his departure on the day owner Randy Lerner starts the search for his replacement.

Lerner has flown in to England to set the ball rolling on appointing his third manager in less than two years.

But McLeish, sacked on Monday having lost the Villa fans' support, is simply apologetic at having failed.

"My only regret in leaving is not being able to achieve more for the supporters and their high expectations," he said.

"I have nothing but the highest respect for the club," he added, in a prepared statement released through the League Managers' Association.

Villa managers since their last league title win in 1981

"When I accepted the role as manager of Aston Villa, I was acutely aware of the responsibility I had to find the best way to serve the great traditions of one of the finest clubs in professional football.

"I was truly honoured to have been given the opportunity to manage the club, which plays such an important part in the fabric of the local community and to its worldwide fan base.

"I relished the challenge and, together with my loyal and very capable staff, dedicated all of my efforts into moulding a successful team."

Following his move from second city rivals Birmingham City, McLeish's appointment suffered a frosty start with the Villa fans, further exacerbated by the perception that his team lacked quality and that his tactics were negative.

The loss of wide men Ashley Young and Stewart Downing last summer was a factor in Villa's failings, as was the long-term injury suffered by England striker Darren Bent in January.

For all that, McLeish genuinely thought he would win the fans round and still be in charge to serve the final two years of his contract.

But the last two Villa bosses whose sides finished as low as 16th, Graham Taylor (in 2003) and David O'Leary (in 2006), were both gone by the start of the following season.

Norwich City boss Paul Lambert has already been linked with the vacancy, only for the Canaries to issue a stern 'hands off' warning, while Wigan boss Roberto Martinez, who spurned Villa's advances a year ago, further enhanced his reputation by keeping the Latics in the top flight.

And former Manchester United star Ole Gunnar Solskjaer has emerged as a contender, his odds having plummeted with bookmakers across the country, coming in to around 6-4 from 25-1.