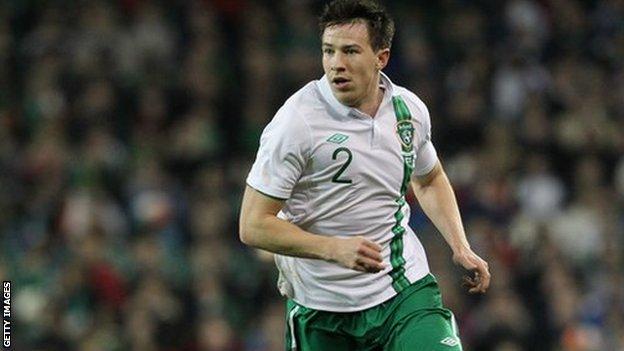 Leicester City defender Sean St Ledger is backing the Republic of Ireland to cause a surprise or two at Euro 2012.

The 27-year-old is in manager Giovanni Trapattoni's squad for the tournament in Poland and Ukraine.

The Republic's group includes reigning world and European champions Spain, as well as Italy and Croatia.

"I think everyone expects us not to win a game in the group (but) history shows in tournaments we often spring an upset," he told BBC Radio Leicester.

The Republic famously beat England at the 1988 European Championship, while at the World Cup they defeated eventual runners-up Italy in the first-round group stage in 1994 and in 2002 they held Germany to a 1-1 draw and only lost to Spain on penalties at the last-16 stage.

"We're obviously going to be underdogs, but we're going out there not just to make up the numbers, but try to progress and go as far as we can in the tournament," St Ledger continued.

"When we first qualified it seemed a bit of an age away, but now it's becoming very, very real."

The centre-back was given his international debut by Trapattoni in 2009 and now has 24 caps to his name, but this will be his first experience of a major tournament.

"These are the games you want to be involved in as a professional footballer and I'm very lucky to have the chance to be in the squad, and hopefully now I'll get chosen in the first 11," he added.

"Opportunities and tournaments like this don't come around too often.

"During a football career if you're fortunate enough to play in one then you're very lucky and very privileged."

The former Peterborough player, who almost joined Ipswich in January, admits playing under the former Italy manager is one of the highlights of his career.

"To say I've worked under a manager like that is a real honour. He's a very good motivator.

"I think it's his enthusiasm that sets him apart from most managers. That love and passion for the game comes through to the boys."