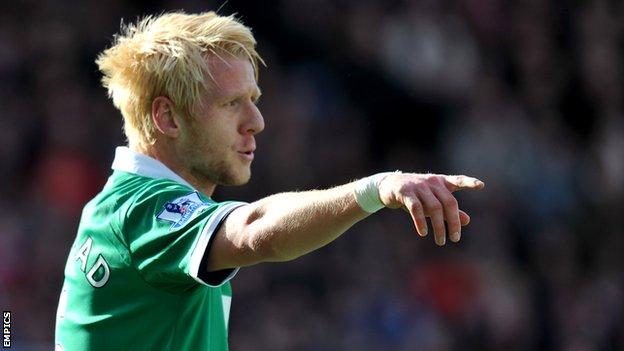 Norwich City's preparations for their second Premier League campaign have begun with the release of Zak Whitbread and Aaron Wilbraham.

But the American's career at Carrow Road has been heavily interrupted by injury, limiting him to 43 starts since he joined from Millwall early in 2010.

Striker Wilbraham, 32, has scored twice in 28 games for Paul Lambert's side.

He was a surprise arrival when he joined from MK Dons in January last year, but earned praise from his manager for his late cameos in the top flight.

"Both lads have been brilliant for the club. It was a difficult decision to make," said Lambert.

"You can't underestimate that they were a big part of what has happened here and people shouldn't forget what they've done and given for this club.

"But that's my job as manager of this football club, sometimes these decisions have to be made and I wish them the best of luck for the future."

Youngsters Matthew Ball, Richard Brindley and Josh Dawkin have also reached the end of their contracts and will not be retained.