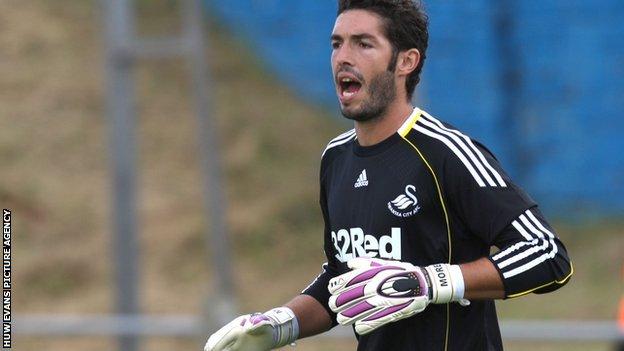 The 30-year-old Portugal international had a year left on his deal after signing for an undisclosed fee from Benfica in July 2011.

With Michel Vorm and Gerhard Tremmel ahead of him in the pecking order, Moreira's only appearance came in the 3-1 Carling Cup loss at Shrewsbury Town.

"This is the best decision for both the club and myself," said Moreira.

"I need to play football and hopefully, after a holiday with my family, I will sort my future with a new club."

Moreira arrived in Swansea with an impressive record, having made over 100 appearances for Benfica.

Whilst at the club he won two league titles, the Portuguese Cup, three consecutive League Cups and one Portuguese Super Cup.

But Vorm's highly impressive first season between the posts for Swansea meant Moreira had little opportunity to show his talents.

"It was very difficult to play in the first team because Michel has done so well this season, and he deserves to be the number one," added Moreira.

"I saw every day in training how good he is, and hopefully I helped provide good competition for him."