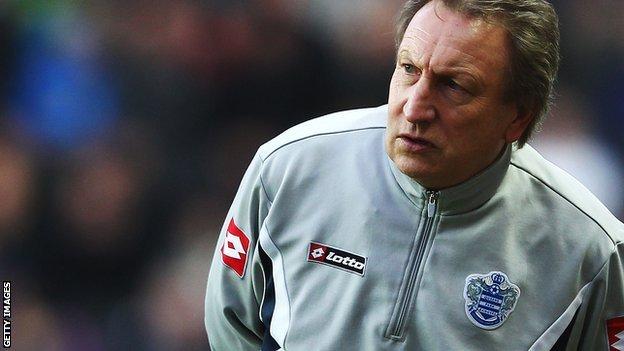 Neil Warnock says QPR would have finished in the top half of the Premier League had the club given him money to spend before the season started.

Warnock led Rangers to the top flight in 2011 but was sacked in January after a winless run of eight league games.

After his departure the west London side bought strikers Bobby Zamora and Djibril Cisse and new boss Mark Hughes managed to stave off relegation.

"I more than played my part in QPR staying up," Warnock told BBC Sport.

"My contribution was to win three away games which helped no end to keep QPR where they are.

"I felt we were the better of the three teams that went up and if we had done business last summer we would have been in the top half of the table, quite easily."

Rangers lost to Manchester City on the last day of the season but Bolton's draw with Stoke meant Hughes's side stayed up.

Afterwards, owner Tony Fernandes said his decision to replace Warnock with Hughes had "been vindicated".

Warnock responded: "I get on well with Tony and still speak to him and people have to say things to justify what they've done.

"I thought I'd be contemplating retiring at this stage in the season having kept QPR up, I'm still convinced that's what I would have done and I think all the QPR fans would be behind me in that."

Warnock, who is now at Championship side Leeds, added that managing QPR "was probably the hardest job I've ever had".

He added: "It was very difficult as a manager. To do what we did in such a short space of time without spending a lot of money was fantastic.

"I'm very proud I managed to take them back into the Premier League [but] disappointed I didn't get £14m to spend in January."