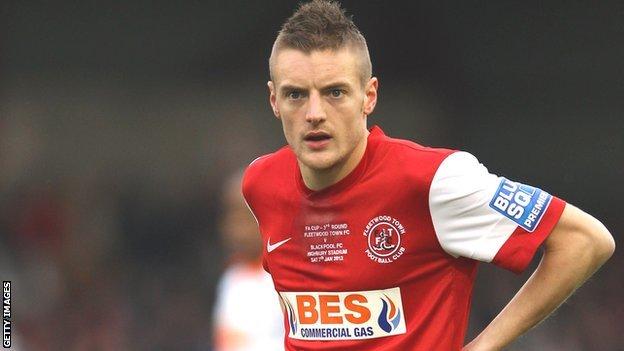 Leicester City have completed the signing of Fleetwood striker Jamie Vardy for an undisclosed fee, thought to be at least £1m.

The 25-year-old, who scored 34 goals this season to help Fleetwood win promotion to the Football League, has signed a three-year contract.

Foxes manager Nigel Pearson had a bid rejected for Vardy in January.

"I got to sit down for a chat with Nigel and this is where I wanted to come," Vardy told BBC Radio Leicester.

"You see the facilities and I thought, 'yes, I can see myself playing here'. And obviously because the manager wanted me as well it made the decision easier.

"He said he'd been watching me for quite a while, obviously if I've caught his eye I must have been doing something right."

Vardy scored three goals in four FA Cup appearances this season, including one against Premier League hopefuls Blackpool, and the striker thinks he is ready to play at a higher level.

"The standard of the players is going to be a lot better," he said. "But I've played in the FA Cup a few times this year and managed to do well against the league clubs and hopefully I can carry that on."

Leicester have already added Manchester United duo Ritchie de Laet and Matthew James to their squad as they aim for promotion to the Premier League next season, but Vardy is not scared of the competition.

"Competition for places can only benefit you," said the former Halifax player.

"If you know you've got that much competition then you're just going to have to work that extra bit harder so you can catch the gaffer's eye.

"If you're not playing with any confidence then you're not going to play well at all. You've always got to have that inner confidence and that comes with the goals."

Fleetwood chairman Andy Pilley admitted Vardy would be a big loss and difficult to replace, but also said that he could not stand in his way of playing at a higher level.

Pilley told BBC Radio Lancashire: "We always knew that Jamie was going to move on this pre-season.

"We wish him well because he's been fantastic for the club. We've fought for good terms and we're pleased with the compensation that we've got.

"He's been absolutely amazing and a lot of supporters will say he's the best player ever that has ever played for Fleetwood."