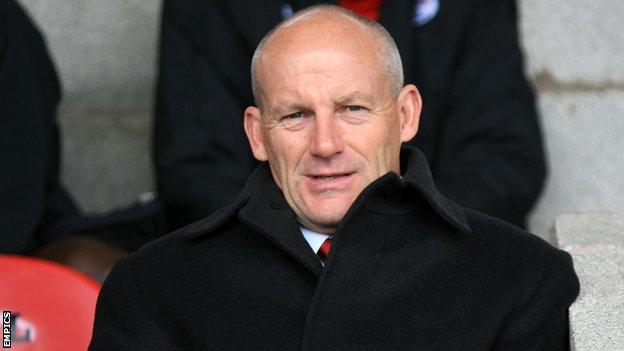 Steve Coppell says he is thoroughly enjoying his role as director of football at Crawley Town.

The 56-year-old will stay at Broadfield Stadium and work alongside new manager Sean O'Driscoll next season.

He told BBC Sussex: "I've had a ball. Helping us get promotion was hands-on but now it's a different role and I'm enjoying it.

"Over the years you have ideas of how a club should be directed. This is an opportunity for me to do that."

Although Coppell assisted caretaker manager Craig Brewster to help the Reds seal promotion to League One on the final day of the season, he will concentrate on off-field matters in the future.

"Sean will have his staff and will do all the team preparation," Coppell continued.

"There's a lot of work to do off the field in terms of the foundations for a club going forward. [Former manager] Steve Evans was here for a time and there wasn't the infrastructure in place here that there was at other clubs.

"We'll be looking to try and progress that to get the best out of the squad of players that we can get together."

Coppell, who joined the west Sussex side in April, played a large role in helping to identify O'Driscoll as the top candidate for the Crawley hot-seat.

"There are people within the game who you admire for the way they do things," Coppell added.

"A lot of the time, they aren't available but Sean was. I thought it would be a good signing for Crawley if he decided to come on board.

"He does his job in his own way. I'm only here to help and support as much as I can."