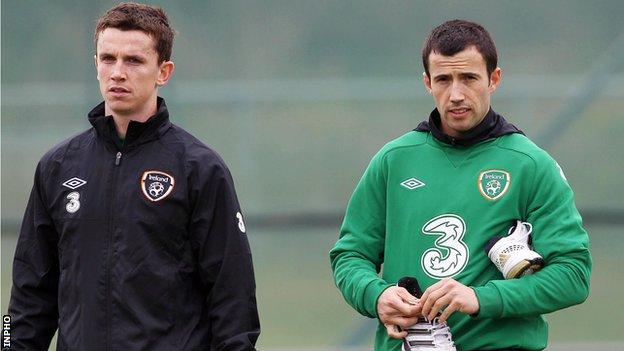 Keith Fahey and Kevin Foley now appear to be the Republic of Ireland's main injury concerns ahead of next month's Euro 2012 finals.

Fears over John O'Shea's fitness have receded after a weekend scare but Birmingham's Fahey [groin] and Wolves player Foley [hamstring] are concerns.

Fahey and Foley linked up with number of the squad in Dublin on Thursday.

"The doctor thinks in maybe a week or 10 days they could be fit," said Republic boss Giovanni Trapattoni.

"They are both important for us. It was important to have this check.

"They could also stay at their clubs but we can see what happens here with our physio and doctor."

Trapattoni oversaw a training session with 10 of his squad at Malahide on Thursday.

"I said thanks to this group because for them it was a little sacrifice. We know they had a very long, tough season," added Trapattoni.

"I know they have family but I said also, remember there is also other national teams, for example in Italy who finish Sunday.

"Then they go 40 hours at home but they have always reported.

"It's a sacrifice but we have to be proud to play for our country."

Sunderland manager Martin O'Neill expressed concern about O'Shea's fitness on Sunday but a scan later revealed only a minor ankle knock and the defender will link up with the Republic squad on Monday.

Robbie Keane is also scheduled to arrive early next week after playing for LA Galaxy this weekend.

Trapattoni revealed that he had watched on "a minimum 30 DVDs" of the Republic's group rivals Spain, Italy and Croatia.

"I want to know every little detail. I wish to give the team 100 per cent about our players and opponents," added the Irish manager.