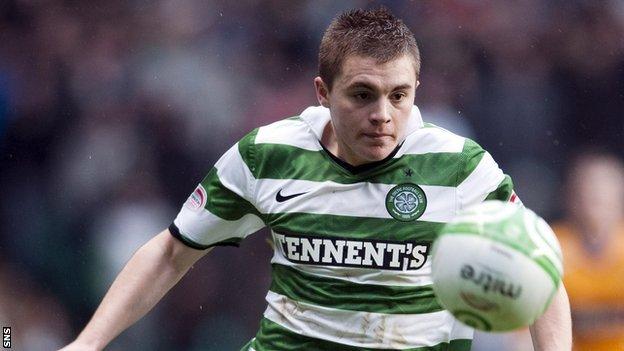 James Forrest is concentrating on helping Celtic into the Champions League rather than worrying about the state of Scottish football.

Rangers remain in administration, could yet be thrown out of the top flight and face a 12-month transfer embargo.

"We'll just focus on ourselves," said the Scotland winger. "Whatever happens over there happens.

"We'll just focus on a good pre-season and hopefully get into the Champions League."

Charles Green's consortium is hoping to complete a takeover that avoids Rangers having to form a new company that would require the other Scottish Premier League clubs to vote to keep them in the top flight.

Some Celtic fans have threatened not to renew season tickets before Friday's deadline until the club make clear their opposition to a newco Rangers joining the SPL.

"The fans want to see us win the league and we did that this year," said Forrest.

"I'm sure they want to come back next season and see that again and hopefully qualify for the Champions League as well. So I don't think that should be a worry."

Forrest will miss Scotland's friendly against the United States later this month with a calf injury.

But the 20-year-old has vowed to choose the Champions League qualifiers over the Olympics if selected for Team GB and is confident he can hit the ground running next term.

"I'm delighted to get a few awards to show what I've done throughout the year," he added.

"I'm delighted on a personal note as well as a team note.

"I think my form has been good. I'm just gutted to have been injured for the last few weeks of the season.

"I'm just focused on getting back fit and playing for Celtic again.

"I've started running in the last week or two. The physios and doctors are happy and I'll definitely be back for pre-season."