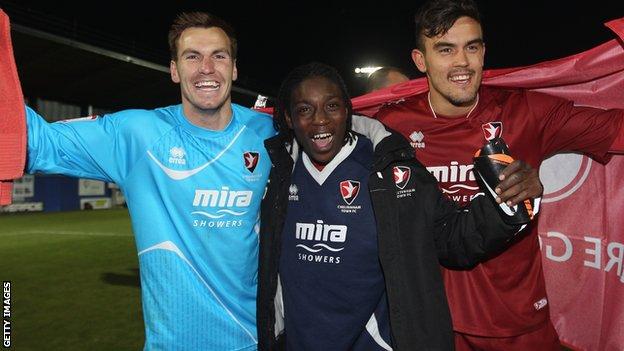 After finishing last season in 17th, the Robins were favourite for the drop at the start of this campaign.

But they ended up sixth in the League Two table and beat Torquay 4-1 on aggregate to book a place in the Wembley showpiece against Crewe.

Three out of three?

They are looking for a return to League One after a three-year exile.

"We were the relegation favourites and were down before the season started," Brown told BBC Gloucestershire.

"But we haven't listened to anyone else all season, apart from the squad we have in the dressing room.

"We know what quality we've got in there."

Brown faced personal criticism at the end of last season after Cheltenham's drop down the league table.

And the 27-year-old's 107 game consecutive run in the first team came to an abrupt end following the arrival of Birmingham City shot stopper Jack Butland, who spent eight months on loan at Whaddon Road across two spells.

But after the England Under-21 international was recalled to his parent club, Brown came back in to the side and proved Cheltenham's key man in the semi-final play-offs after pulling off a string of fine saves to deny the Gulls.

"Everyone keeps saying how professional I've been but for me that's just part of the job," said Brown.

"Thankfully I've got my chance again and I can keep playing."

And although the keeper remained modest of his achievements at Plainmoor on Thursday, midfielder Marlon Pack was quick to praise Brown.

"Scott made some amazing saves and showed what a top keeper he was and we had him to thank for coming into the dressing room 0-0 at half-time," said the 21-year-old.

"We seemed to be a bit more solid in the second half and I think that's all down to Browny. He was magnificent."

Pack himself netted a sublime free-kick to seal the win and he believes the Robins' impressive display will give them momentum going in to the final.

"We're coming into the game high in confidence, like Crewe are, and with the belief we can beat anyone," added Pack.

"To get to Wembley this season is something I don't think anyone thought we would do. But we're here now and we deserve it so we'll go and grab this opportunity with both hands."