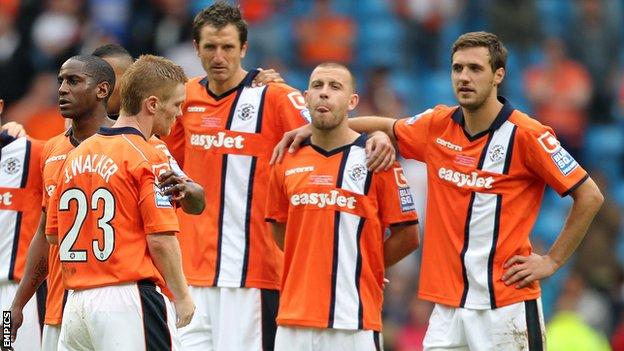 The phrase 'biggest game in our history' is one the players of Luton Town have heard before.

In the last two seasons, the Hatters have entered the Blue Square Bet Premier play-offs, only to wither under the weight of expectation.

Another year has gone by and Luton have again reached the final and, given the club's aspirations, the pressure on the team is no less severe.

"We've gone on record saying it's the most important game in our history," said chairman Nick Owen, ahead of Sunday's Wembley showdown against York City.

"It's just so crucial to the club's future. We suddenly get more television money and get money from the Football League for being part of it all. You get bigger crowds because away teams bring more fans.

"The economics of running a football club become easier and a lot more rewarding. We don't want to talk about having another season in the Conference."

The descent of Luton from Championship outfit to Conference nearly-rans in the space of three years has been well documented.

The Luton Town Football Club 2020 consortium, fronted by TV presenter Owen, took over the Bedfordshire side in 2008 and has provided financial stability - but so far, has not been able to deliver promotion.

"The first thing was to make sure the club survived, whatever league we were in. And I think the fans are mindful of that," said Owen.

"Now it is a club running within its means and is pretty successful compared to how it looked a few years ago. My colleagues have done a fantastic job in difficult times.

"The next big target is to get back into the Football League and we are 90 minutes from returning.

"I'm trying not to get too stressed about it - but it does mean a lot. We try not to look back and be too resentful anymore. It could be all wonderful after 90 minutes."

In 2010, it was this year's final opponents York who denied Luton an instant return to the Football League, winning out in a play-off semi-final marred by crowd violence.

It adds an extra edge to this year's contest and more recent history suggests the Minstermen may start as favourites, having won three of the four meetings between the clubs this season, and drawn the other.

"They are playing out of their skins. They've had a terrific season and already have the FA trophy which they won at Wembley. We're under no illusions - it's going to be extremely difficult," added Owen.

Luton have a not-so-secret weapon in manager Paul Buckle, who has previous success at this level after taking Torquay up through the play-offs and is looking to repeat the achievement just two months after replacing Gary Brabin at Kenilworth Road.

And despite a victory over Arsenal in the 1988 League Cup final and matches against the likes of Manchester United and Liverpool during a decade in the top flight until 1992, Owen is insistent that winning promotion would be a pivotal moment in the annals of the club.

"When we lost the final last year, that was the most important game in the club's history," said Owen.

"We didn't make it and we now come along to another one that becomes the most important game in our history just because this is where we are.

"There have been a few. But it's absolutely crucial to try and get back into the Football League."