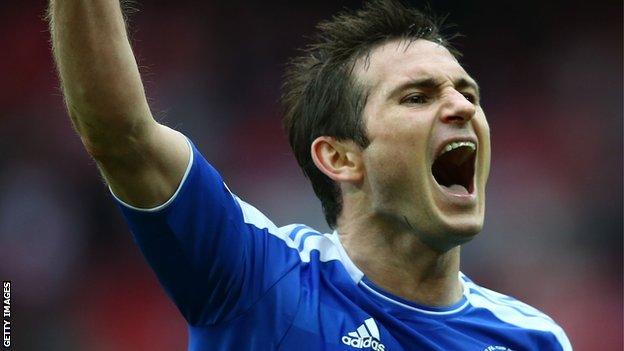 Frank Lampard is relishing the task of leading Chelsea in the Champions League final against Bayern Munich in their own backyard, saying: "Bring it on!"

Chelsea must beat Bayern in the German side's Allianz Arena to lift the trophy for the first time.

Lampard is undaunted by the prospect, but admits that the venue gives Jupp Heynckes' side an advantage.

He said: "As long as we believe in ourselves and have a great quiet focus and determination, then bring it on!"

The 33-year-old midfielder added: "The fact it is being played at the Allianz Arena gives them an advantage but it is great here in Munich.

"The atmosphere is amazing and we have sampled a bit of it already, travelling in from the airport.

"You can play around with how much it means [to get] changed in your home dressing room, or playing on your home pitch in front of your own fans, but there is a tremendous determination in our group."

Chelsea's interim manager Roberto di Matteo is equally convinced his side can end the season by claiming the trophy that has eluded them for so long, most agonisingly when they lost on penalties to Manchester United in Moscow in the 2008 final.

Di Matteo said: "We have all the qualities you need to win this competition. These qualities have taken us to this event here, so I am very positive and very confident."

Despite Chelsea's progress to the final, Di Matteo has yet to secure his long-term future as Chelsea boss, but Lampard believes he has done "a perfect job" so far.

A full-time successor to Andre Villas-Boas has not been confirmed, even though Di Matteo has guided the Blues to an FA Cup final win and Saturday's Champions League climax.

Lampard, who will captain the side against Bayern with John Terry suspended, said: "Di Matteo has been very clever managing the situation.

"Rather than make drastic changes he spoke to everyone individually."

The Italian remained coy on potential developments beyond the meeting at the Allianz Arena, with former England coach Fabio Capello the latest name to be linked with Stamford Bridge.

Di Matteo said: "I am just focusing on this game. You don't know what the future will bring. We are all just focused on being successful."

Lampard continued: "We got a few wins but then the result against Napoli in the Champions League changed everything, when we came back from 3-1 down in the first leg to go through. From them then on, quietly, he's done a perfect job."

Lampard insisted there would be no deputation to owner Roman Abramovich from Chelsea's squad in support of Di Matteo should they beat Bayern.

"People seem to think that at Chelsea we ring up the owner every now and again to decide who comes in or who gets sacked," said Lampard. "It's not how it works at this club and I don't think that's how it should work at any club.

"Decisions like that are out of our hands and if you start thinking about things like that you are taking your eyes off that ball, but I will be very pleased for the manager and the club if we win."

But Chelsea have been in no rush to make a firm decision on the 41-year-old's future, with chief executive Ron Gourlay saying there would be no talks until after the Bayern Munich game.

Yet Desailly is in no doubt that Abramovich should give former team-mate Di Matteo the job on a permanent basis.

"He is part of the team that built the foundation of the club and he gives 100%," added Desailly, who helped Chelsea win the FA Cup in 2000 and the Uefa Super Cup in 1998.

"He's been one of the players - there is something special about him. There is a big challenge to change in the squad. We need to give him the chance.