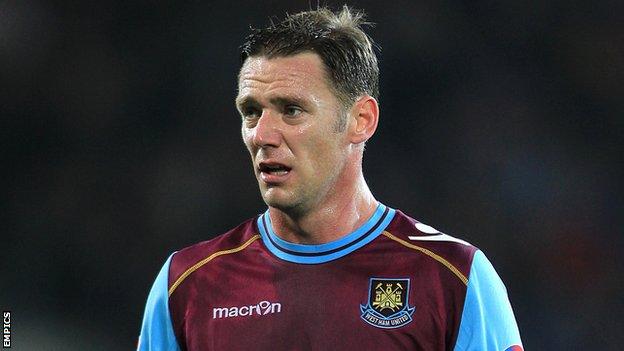 Allardyce was criticised by Hammers fans earlier in the season for the club's style of play.

But Nolan told BBC London 94.9: "I grew up with him as my gaffer and I want to do it for him as well as my teammates and the staff.

"Hopefully he will be celebrating because he deserves it after the stick he's received."

Last month West Ham vice-chairman Karren Brady said Allardyce would not be sacked if the east London outfit failed to seal an automatic return to the Premier League.

Nolan, 29, added: "If the tragedy does happen and we don't go up on Saturday, we'll have to go back to the drawing board and make sure we are a Premier League team this time next year.

"Sam is the man to get this club back where it belongs."

Blackpool, West Ham's opponents on Saturday, have recent experience of winning the play-offs having won promotion via the showpiece final in 2010.

Each year the Championship play-off final is dubbed the richest game in world football, with the value to the winner estimated to be worth £90m. That sum includes higher broadcast income, gate receipts and commercial income from playing in the Premier League.

This year Deloitte calculates the game to be worth 'only' £45m to either West Ham or Blackpool.

That is because both received Premier League monetary "parachute payments" after they were relegated last season, and so are starting from a higher financial base point than other Championship teams.

"The majority of their players and Ian Holloway [Blackpool manager] have been there and done it and know what it is about," Nolan continued.

"We're a club in transition from last year. To just miss out on automatic promotion was disappointing but the way we've reacted to that has been brilliant.

"It's about making sure we do what we've been doing over the last few weeks."

Meanwhile Nolan, who signed a five-year deal with the Irons when he joined from Newcastle last summer, has re-iterated that his long-term future lies at Upton Park.

"I very much intend to be here next season no matter what happens on Saturday," he added.

"This is a fantastic club which I feel will be going in the right direction [during] the years which I've signed [for].

"I'm delighted a club of this stature wanted me to come here. I knew it was the right decision as soon as I walked in and signed the papers."