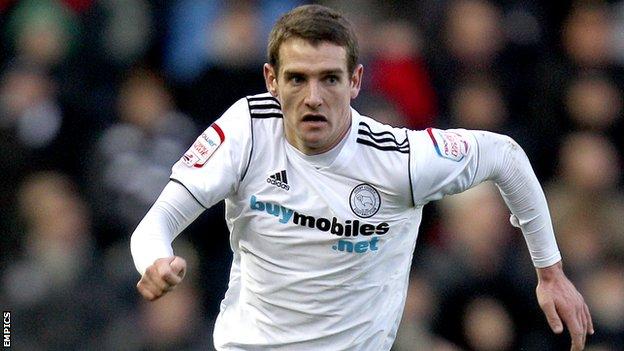 Derby County midfielder Craig Bryson says he was shocked to receive a call-up by Scotland for the friendly against the United States in Florida on 26 May.

The 25-year-old has one cap from a substitute appearance against the Faroe Islands in a friendly in 2010.

"I've been overlooked for so long I didn't expect to be in this squad, so when they phoned me to tell me I was surprised," he told BBC Radio Derby.

Bryson joined Derby last summer and was named their player of the season.

It was his maiden campaign with the Rams, who finished 12th in the Championship, and he believes his move to an English club from Scottish Premier League side Kilmarnock has boosted his chances of being selected by Scotland boss Craig Levein.

Bryson added: "The manager always looks down south for his players for Scotland, so I knew if I came down to Derby and did well I might have a chance to get back in the squad, now it's proved right.

"He looks down south at players because it's a higher standard than the SPL."

The former Kilmarnock captain is eager to impress Levein ahead of Scotland's 2014 World Cup qualifying campaign, which begins with matches against Serbia and Macedonia in September.

"It's up to me to show what I can do for Scotland and then hopefully be involved in the qualifiers leading up to the World Cup," he said.

"I'm not sure how much he's watched me at Derby, so it's up to me to go there and prove in training I want to be there and, if I get a chance, to go out there and do well and show Craig Levein what I can do."