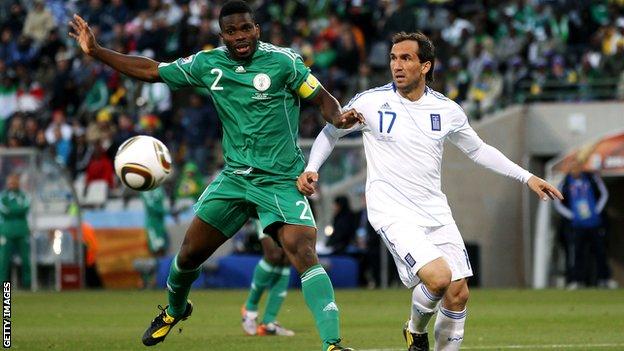 Joseph Yobo has been ruled out of next month's 2014 World Cup and 2013 Africa Cup of Nations qualifiers.

The Nigeria skipper sustained an injury during Wednesday's Turkish Cup final, whilst playing for Fenerbahce.

According to Nigeria coach Stephen Keshi, the Istanbul side suggest Yobo will be out for over four weeks.

Keshi has added three players to the squad, for the matches against Namibia, Malawi and Rwanda.

"It's a huge blow to lose your captain and the most experienced player in your team," Keshi told BBC Sport.

"It's sad I must admit but we've got to look ahead and work with a positive mindset.

"We have to fight the hard way now. I'm confident one of the three replacements will fill that void brilliantly."

Nigeria are already without experienced trio John Obi Mikel, Taye Taiwo and Peter Odemwingie. The three players, who ply their trade in the English Premier League, have been left out of the squad by Keshi.

The Super Eagles host Namibia on 3 June in a World Cup qualifier in Calabar. They follow this with a trip to Malawi the following weekend for another match on the road to Brazil 2014.

On the weekend of 15-17 June, Nigeria entertain Rwanda in the second leg of their Nations Cup first round tie. There is all to play for, as the tie is goalless after the first leg back in February.