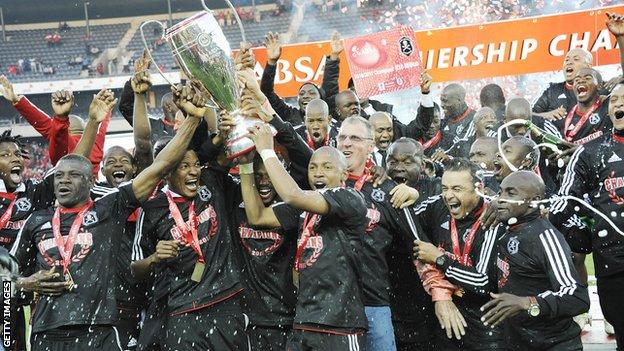 Orlando Pirates are champions of South Africa for a second successive season after a nervous final day in the Premiership.

Pirates needed to win to be sure of the title, as they led Moroka Swallows by just two points at the start of play.

The defending champions were forced to come from 2-1 down at Golden Arrows, to win 4-2.

Swallows were denied their first league title in 47 years, despite winning 1-0 at Maritzburg United.

Pirates were trailing 2-1 in their contest at Moses Mabhida Stadium in Durban, before Siyabonga Sangweni levelled before the interval.

The experienced striker Benni McCarthy then netted just past the hour mark, as Pirates placed one hand on the trophy.

Elsewhere, Swallows then took the lead through Lefa Tsutsulupa moments after a goal had been disallowed.

An equaliser for Golden Arrows would have gifted Swallows the title on goal difference, but McCarthy made sure with his second of the afternoon in the final minute.

Pirates midfielder Daine Klate becomes the first man to win five Premiership titles in a row. He won three while with SuperSport United, and now two with Pirates.

At the other end of the table, already-relegated Jomo Cosmos lost 1-0 at Santos. That victory was not enough to guarantee top-flight survival for Santos, who must now go into the relegation play-off after finishing second from bottom.

And BidVest Wits ended the season on a high. Goals from Katlego Pule and Bongo Jayiya gave Wits a 2-0 win at Platinum Stars - their first league victory of 2012.