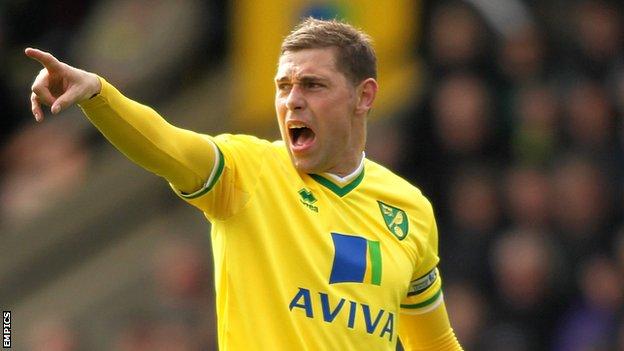 Norwich City chief executive David McNally insists the club have not fallen out with striker Grant Holt after rejecting his transfer request.

The 31-year-old was on target 17 times this season in all competitions and was the Premier League's second-highest English scorer with 15 goals.

McNally said: "We have not had an argument or row with any player including Grant.

"The club is very grateful to all of the players for another great year."

He added: "Players with time left on their contracts will only leave NCFC if we are happy for them to do so."

McNally confirmed that the former Nottingham Forest forward had asked to leave the club and Norwich have rejected his request.

BBC Radio Norfolk learned of his surprise request, which came after three years at Carrow Road in which he has helped them into the top flight.

He is expected to take part in team-mate Adam Drury's testimonial against Celtic on Tuesday.

Holt joined the club when they were in League One, helping them win back-to-back promotions, and has finished as Norwich's top scorer every season, netting 70 goals in 130 appearances.

His form this term had led to speculation he could feature in Roy Hodgson's England squad for this summer's European Championship.

The powerful striker was not included, although team-mate John Ruddy was selected as one of Hodgson's three goalkeepers for the tournament.

Holt, who has two years to run on his Norwich contract, was brought to the club by Bryan Gunn, the predecessor to current manager Paul Lambert.

He arrived from Shrewsbury for a reported £400,000 fee after spells with Halifax, Barrow, Sheffield Wednesday, Rochdale and Forest.

The future of Lambert has also been subject to speculation after the Scot guided the Canaries to mid-table security in their first Premier League campaign for seven seasons.

He had been strongly connected to the vacant Aston Villa post, but the Midlands club are in talks with former Manchester United striker Ole Gunnar Solskjaer.