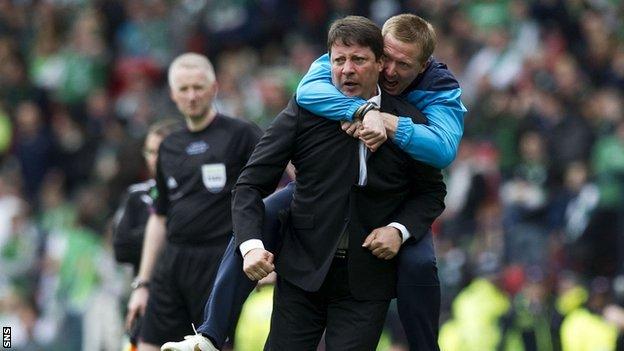 The 5-1 victory against their Edinburgh rivals at Hampden ensured Hearts' eighth tournament win and their third in the last 14 years.

"He's been different class for the players this year and this tops it all off," said former Hearts captain Locke.

"This is unbelievable, absolutely brilliant. I thought we played well."

It's sad to leave but I've got to move on

Locke continued his record of never having lost an Edinburgh derby as a player or coach.

Darren Barr opened the scoring and Rudi Skacel struck the second before James McPake pulled one back for Hibs.

Pa Kujabi was sent off after conceding a penalty early in the second half and Danny Grainger converted before further goals by Ryan McGowan and Skacel.

"We were a wee bit slack with the Hibs goal but apart from that I thought we dominated the game," said Locke.

"I think the sending off obviously changed it but I thought it was a penalty and he'd already been booked so [referee] Craig [Thomson] had no option but to send him off but I thought we were really professional and played really well."

Sergio, who took over from Jim Jefferies in August, enthused: "I'm very happy.

"A 2-1 result is never comfortable. We spoke at half-time that we had to go very strong in the second half and we solved the game very, very quickly.

It's the best way to say goodbye

"Fantastic supporters, best in the world."

Ian Black was given warm applause from the Hearts supporters as he was substituted late on, the midfielder due to leave the club this summer.

"It's great to leave the club doing something like that," he said. "I don't know what the reasons are behind it, I think it is finance but you can't rule anything out.

"We've done this today, [club owner] Mr Romanov was here himself so you never know. I'm a Hearts fan and I know I'm leaving but strange things happen.

"It's sad to leave but I've got to move on. I wouldn't mind a new challenge. Hopefully after today my phone will start ringing."

Skacel also confirmed he is likely to depart and was similarly delighted to sign off with such an emphatic win.

"I'm so pleased to have the trophy in my hand and we showed everybody we have good spirit and we are better team and there's only one team in Edinburgh," the Czech midfielder added.

"It's the best way to say goodbye. We will see what happens, you never say never but it was probably my last game."