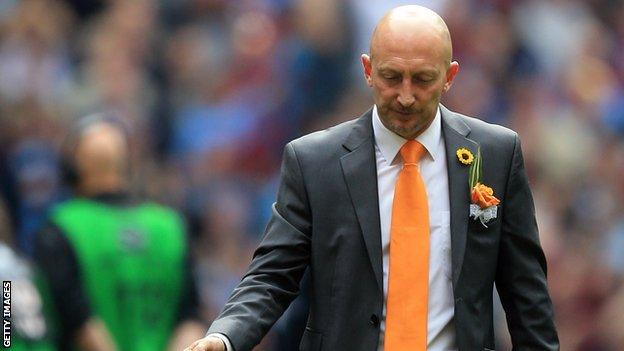 Blackpool manager Ian Holloway has ordered his players to get over the hurt of missing out on a place in the Premier League.

The Seasiders were denied promotion after a 2-1 defeat by West Ham in the Championship play-off final at Wembley.

But Holloway said there was no time for his players to feel sorry for themselves.

"We've got to get on and bounce ourselves straight back, it's about building now," he added.

Blackpool have not beaten West Ham since 2 January 1971 while defeat at Wembley ended a run of 11 play-off games unbeaten.

Blackpool were relegated from the top flight at the end of the 2010-11 campaign after finishing with 39 points, a tally which would have seen them finish 16th the season just gone.

Despite finishing 11 points behind West Ham in the Championship table, they went into the play-off final in optimistic mood after a nine-match unbeaten run.

"We've got to get over playing in the Championship again because we were all hoping we would be in the top flight," added Holloway.

"They've [the players] just lost a great big bonus and I feel for them because they deserve more.

"But they should be very proud of their efforts, this is a fantastic group of people and I'm proud to be a small part of it.

"Sometimes in life it goes against you, but you have to congratulate your opponents.

"I thought my lot gave a great account of themselves, we created more than enough chances to win the game.

"We've got to get on and bounce straight back."