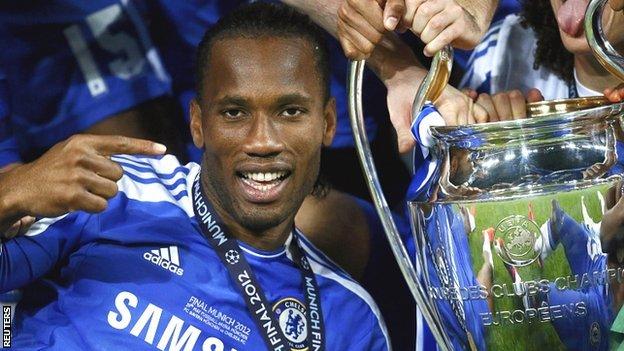 Didier Drogba can make his exit after eight years at Chelsea knowing it is mission accomplished.

The Ivorian centre forward, who scored the winning penalty as Chelsea beat Bayern Munich to win the European Cup, announced on Tuesday that he was leaving Stamford Bridge.

He was signed for £24m in 2004 from French club Marseille as one of Roman Abramovich's key initial signings after the Russian billionaire took over the London outfit - and Drogba can now sign off having delivered the one trophy Abramovich craved more than any other.

If anyone deserved a Champions League winner's medal it was the powerful striker - he had previously lost in one final, three semi-finals, one quarter-final and twice in the last 16.

But, on Saturday, the Ivory Coast striker scored the decisive spot-kick in the penalty shoot-out at the Allianz Arena to erase all those previous scars.

The red card against Manchester United in the 2008 final, the tirade into the television camera after a controversial defeat by Barcelona, a penalty shoot-out loss to Liverpool - Drogba's pain on the Champions League stage has been hard to enough to watch, let alone endure.

Drogba's highs and lows during his Chelsea career

Despite being a player who consistently delivered for Chelsea - he scored nine goals in nine finals - Europe's top competition always looked destined to elude him.

Drogba, though, maintained the faith.

Accused of being an "actor" by some because of his theatrics, in Munich he put in a performance more in keeping with the power and poise which made him such a feared opponent for defenders, scoring with a bullet header to equalise against Bayern before converting the crucial penalty.

The man himself put the success down to divine intervention.

"It was [fate]," said the 34-year-old. "I believe a lot in destiny. I pray a lot. It was written a long time ago. God is wonderful. This team is amazing.

Drogba scored for Marseille on his Champions League debut in a 4-2 defeat at Real Madrid in September 2003 - 75 appearances and 39 goals later he finally had a Champions League winners' medal hanging from his neck.

It is a testament to his determination and resolve that he delivered at the end of a season which had started in such unpromising fashion.

He was a peripheral figure seemingly on his way out of Chelsea under former boss Andre Villas-Boas during the first half of the campaign but, as has so consistently been the case during his time with the Blues, he came to their rescue when the club needed him most.

"Didier Drogba has been the best centre forward of his type, certainly in the Premier League, for the past eight years," former Manchester United defender and Sunderland manager Steve Bruce told BBC Radio 5 live.

"How are they going to replace him? He has been quite fantastic, year in and year out."

While there is plenty to admire about Drogba's qualities on the pitch, it is a tribute to the 2006 and 2009 African Footballer of the Year that he uses his fame to try to bring peace to his native Ivory Coast.

He is one of the 11 members of Ivory Coast's Truth and Reconciliation Commission and, although his team-mate Frank Lampard was talking about his value to Chelsea, he also summed up what he means to so many people far beyond the football pitch.