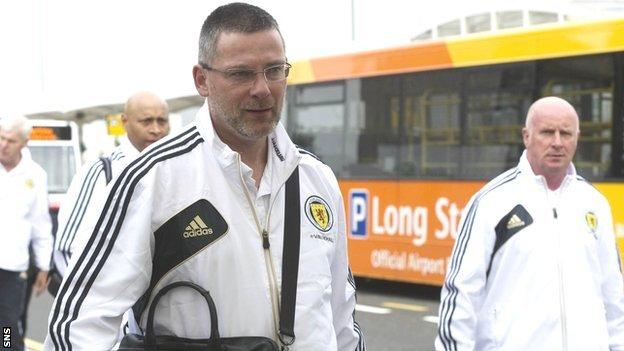 Scotland's trip to Florida should not be viewed as a holiday, maintains assistant manager Peter Houston.

Part of the squad left Glasgow Airport on Sunday to prepare for Saturday's friendly against America.

Scottish Cup winner Andy Webster will leave later and the English-based players will join the squad on Monday.

"We see this game as being the first in the build-up towards the qualifiers for the World Cup, so it's a very important game in many ways," said Houston.

The Dundee United manager, assistant to Craig Levein in the national set-up, reported no call-offs from the 22-man squad who will take on the USA in Jacksonville in the early hours of Sunday morning, UK time.

"It's one that we're looking forward to but we're not there for a holiday," Houston added.

"We're here to try to win a match against the United States so the preparation will be as thorough as ever."

Scotland's World Cup qualifying campaign to reach the finals in Brazil in 2014 begins at Hampden in September against Serbia.

When the squad was announced last week, 15 squad members were attached to clubs in England and Wales, though that number has dropped now that goalkeeper Craig Gordon has been released by Sunderland.

Following Saturday's match, Russell will join the Scotland Under-21 squad for their European Championship qualifier against Bulgaria on 31 May.

Defender Webster's departure has been delayed so that he can take part in Hearts' Scottish Cup victory celebrations in Edinburgh.

Among the players who will fly from Manchester on Monday will be midfielder Matt Phillips, who suffered Championship play-off final defeat with Blackpool but will hope to end the season with a first Scotland cap.

"It's great the amount of players who have turned up," Houston added.

"Some are flying out tomorrow and the Scottish-based lads are already here."