Poland and Greece both had a man sent off as an eventful opening match of Euro 2012 ended in a draw.

Robert Lewandowski headed Poland into the lead before Greece's woes continued with the sending off of Sokratis Papastathopoulos before the break.

Dimitris Salpingidis fired in the equaliser after the restart before he was brought down by keeper Wojciech Szczesny, who was shown a straight red.

But Giorgos Karagounis's penalty was saved by substitute Przemyslaw Tyton.

Alan HansenMatch of the Day

At half-time I thought the Greeks were buried - down to 10 men and a goal down but credit to them for coming back. Salpingidis came on and transformed things. Szczesny was to blame for the penalty. I don't know why he went with his feet.

It was a remarkable first match of the European Championship.

Few would have predicted that Greece would come away from the opening game with anything more than a defeat following a horrendous first-half display.

And co-hosts Poland - roared on by a partisan home crowd - dominated long periods of this opening encounter and will feel that victory should have been secured even though they would have lost but for the penalty save.

Poland, playing in their first competitive game in two years, frequently exploited their opponents' poorly defended left-hand side during the opening spell of the match.

The first goal threat came from that side when Lukasz Piszczek, who looked lively on the wing, beat his marker and delivered into the area where Lewandowski controlled and fed Ludovic Obraniak, whose shot was blocked.

Murawski was next to cause butterflies in the Greek defence when his shot was tipped over by veteran keeper Kostas Chalkias.

The breakthrough came in the 17th minute when Borussia Dortmund striker Lewandowski was left unmarked at the far post to head in Blaszczykowski's brilliant cross from the right.

Referee Carlos Velasco Carballo had let the game flow up until then, but shortly after the goal he showed the first yellow card of the tournament to Papastathopoulos, who appeared to fairly challenge for a header. 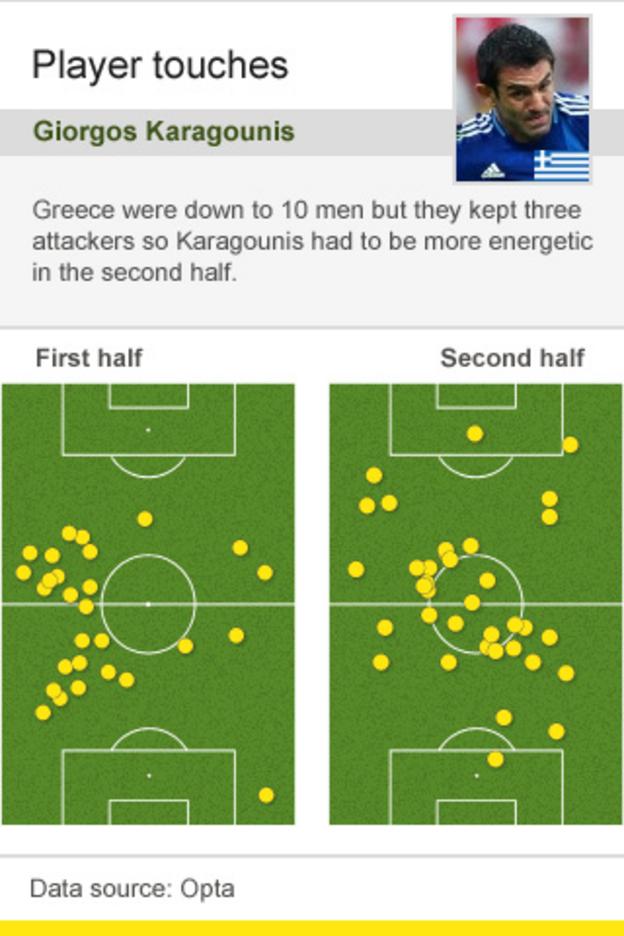 The Spanish official then delivered a huge blow to the Greeks when he brandished a second yellow followed by a red to Papastathopoulos.

The defender was judged to have held back forward Obraniak, who seemed to slip as he was trying escape his marker.

It seemed luck was not on the side of the Fernando Santos's team, but they came out after the break revitalised.

Moments later, Celtic striker Giorgios Samaras, arguably Greece's best player on the night, should have given his side the lead, but he hopelessly mis-hit his shot from three yards.

The 2004 champions were handed a glorious chance to steal the points 20 minutes from time when Szczesny brought down Salpingidis in the area.

Tyton came on to replace the Arsenal keeper between the posts and, with his first touch, saved Karagounis's spot-kick low down to his right.

Greece's next Group A match is against the Czech Republic on Tuesday at 17:00 BST, which will be followed by the eagerly awaited clash between rivals Poland and Russia.