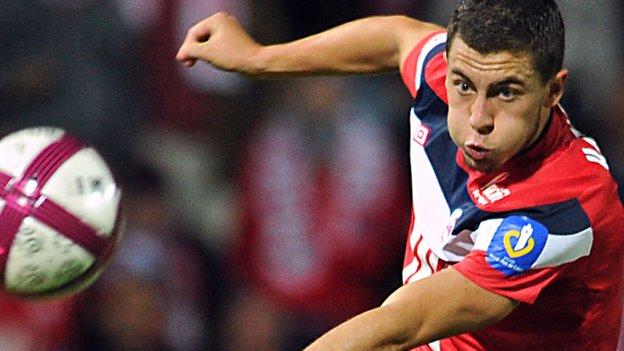 Sought-after Lille midfielder Eden Hazard looks set to sign for Chelsea this summer after announcing he is joining the "Champions League winner".

The 21-year-old had reportedly attracted interest from several of Europe's top clubs, including Manchester City and Manchester United.

Nov 2008: Given his first cap for Belgium, aged 18, in a substitute appearance against Luxembourg

Sept 2008: Becomes Lille's youngest-ever goalscorer with a strike against Auxerre in 3-2 win

May 2009: Wins Young Player of the Year award, the first overseas player to do so

May 2010: Retains Young Player of the Year award, the first player to do so

May 2011: Helps Lille win a league and cup double, as well as winning Player of the Year

May 2012: Wins Player of the Year again after scoring 17 league goals

But the Belgian is reportedly heading to Stamford Bridge on a five-year deal for a fee said to be around £32m.

The midfielder, who is currently on international duty with Belgium and is expected to face England on Saturday, has used the social network to tease details of his transfer in recent weeks.

However Chelsea declined to comment on any move, saying: "As with all transfers, when we have something to announce, we will announce it in the usual way."

The playmaker, who made his Lille debut as a 16-year-old in November 2007, has been capped 26 times for the Belgian national side.

He was also named 2012 Player of the Year in France, becoming only the second player in French football history to win the accolade two years running - this came after picking up back-to-back Young Player of the Year awards in 2009 and 2010.

In 2011, the youngster also helped guide Lille to their first league championship since 1954, while 17 goals this season aided qualification for next season's Champions League.

"The way his transfer has been played out live on Twitter [will mean] a few people have already lost patience with the type of character he is," said Auclair, France Football correspondent.

"But in terms of raw talent he is absolutely spectacular. Technically, he is superb. He is very quick, and although he is still very young, he is quite experienced - this was his fifth season with Lille.

"But he only has two goals in 27 games for the Belgium national team so he is not quite the finished article yet."