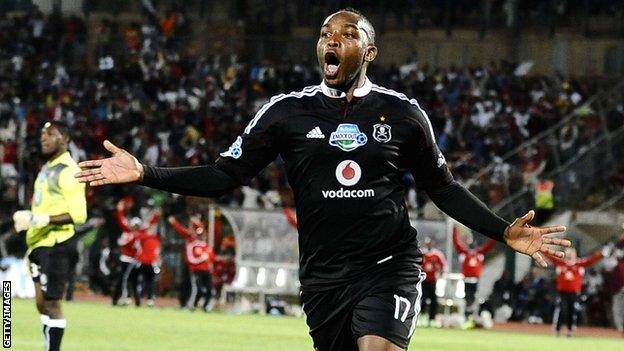 The 34-year-old was overlooked for the Bafana Bafana squad for the 2014 World Cup qualifiers against Ethiopia and Botswana in June.

But after striking twice in the Pirates' 4-2 win over Golden Arrows to seal their league triumph, Palacios urged South Africa coach Pitso Mosimane to reconsider.

"Benni might have had his differences with some national football association officials in the past, but he has been a reformed character playing at Pirates this season," the former Peru midfielder said.

"I have found him to be a model footballer who is disciplined and trains hard.

"It is all very well saying South Africa must find players for the 2014 World Cup in Brazil, but first you have to get there."

Former South Africa coach Ted Dumitru backed Palacios, telling the South African newspaper, the Mail and Guardian: "There is nobody [in South Africa] close to the playing intelligence of Benni and that counts even though he is 10 kilograms overweight."

The Cape Town-born striker has struggled with his weight in recent years.

He was fined by English Premier League club West Ham United after failing to meet weight-loss targets. He was released by the London club and signed for the Pirates in August 2011.

McCarthy went on to hit 10 South African Premiership goals this season - an average of one every three games.

His two goals on Saturday sealed a second successive domestic treble, after the Buccaneers had already won the South African League Cup and Top 8 Cup.

McCarthy is Bafana Bafana's record goalscorer, with 31 international goals in 79 appearances - a run which came to an end when he was omitted from hosts' 2010 World Cup squad.