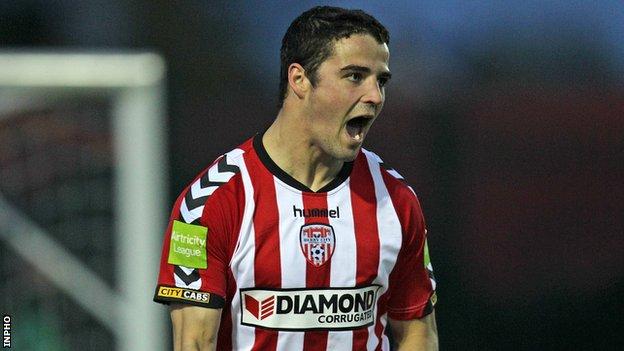 Bray had the better of the first half and Kieran Waters put them ahead on the stroke of half-time.

However, McLaughlin nodded Derry level on the hour and then struck the home side ahead on 67.

Derry had the first chance in the eighth minute but McLaughlin headed over a Simon Madden cross.

But Bray began to take control midway through the first half and Derry keeper Gerard Doherty had to make a great save to deny Dane Massey.

Waters blasted over a good Bray chance on 33 but the midfielder atoned in first-half injury-time as he netted after a defensive mix-up between McBride and Shane McEleney.

Derry improved after the break and Rory Patterson floated a good chance wide on 53 after breaking clear of the Bray defence.

The equaliser came on the hour as McLaughlin header home a superb Patrick McEleney cross after Patterson had won the ball in the Bray half.

Sub Owen Morrison's flick-on enabled a charging McLaughlin to give Derry the lead on 67.

Bray were back on terms five minutes later as O'Connor headed home after slack Derry marking at a corner kick.

Doherty had to make another great save to prevent a second Bray equaliser but Derry bossed the closing stages with McLaughlin missing another good chance in injury-time.

Derry's win moves them up to fourth in the table and with leaders Sligo Rovers surprisingly losing at UCD, the Candystripes after now nine points off the pace.

Derry trail second-placed Shamrock Rovers by two points and a St Patrick's Athletic by a point.