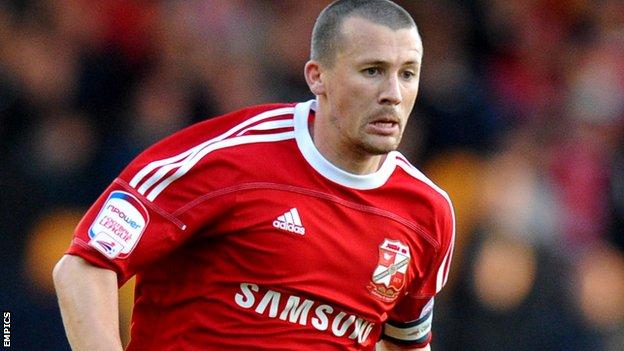 The 24-year-old defender agreed a three-year deal, with the option of a further 12 months, when he first arrived from Celtic in August 2010.

And the League Two champions have decided to take up the extra year to secure his services until 2014.

"It's something I thought would happen - I'm happy here and the club are happy to have me," Caddis told BBC Wiltshire.

"The manager likes me and people behind the scenes have complimented me on the way I've put myself about.

Caddis made 50 appearances for Swindon Town in the 2011-12 season, including in their 2-1 FA Cup victory over Wigan

"It's a bit of security for myself and I just hope by the end of my contract I'll be playing in the Championship with Swindon."

A product of the Celtic academy, Caddis played 24 games for the SPL outfit before making the switch to England.

He has since established himself as a regular in the heart of the Swindon defence and has amassed 92 appearances for the Robins.

Caddis was vice-captain at the start of the season but was promoted to skipper in October after manager Paolo di Canio opted to strip Oliver Risser of the armband.

"I'm still relatively young and to captain a senior side is something special," said Caddis.

"It's something I enjoy as I like the responsibility and I thrive off it. Thankfully the manager has seen that in me."