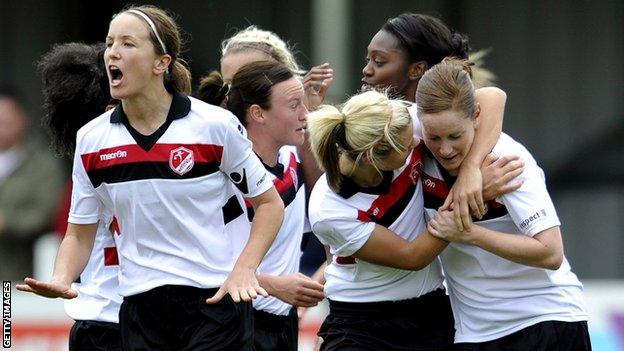 Arsenal's 100% Women's Super League record has come to an end after they were held to a 3-3 draw at Lincoln.

The league leaders needed a late equaliser from Kim Little, her second leveller of the game, to prevent defeat by the Lady Imps.

Birmingham City closed the gap at the top to two points running out 3-1 winners against Liverpool.

Bottom side Doncaster Belles remain pointless after they were beaten 3-2 by Bristol Academy.

A week after Lincoln beat Arsenal 4-3 in a Continental Cup group match the two teams battled out another thrilling encounter.

The Gunners went ahead in the 22nd minute, left winger Rachel Yankey driving in a well-struck shot at the end of a deadly counter attack.

But the Imps were level within four minutes as right winger Jess Clarke crossed for midfielder Collette McCallum to slide the ball home.

And six minutes before half-time the home side went ahead through a close-range shot by midfielder Megan Harris following a Lucy Staniforth free-kick.

Arsenal hit back after the break and striker Little sneaked in behind the home defence to reach a through-ball and level the scores in the 66th minute.

Little then missed a simple chance and Arsenal paid the price as defender Rachel Daly put Lincoln back in front, shooting home after the ball had bounced off the post.

But Scotland star Little made amends with a neat lob that brought the equaliser five minutes from time.

The Gunners then almost snatched victory in stoppage time, Yankey drilling a long range free-kick against the crossbar.

A Karen Carney cross deflected off Liverpool defender Nicky Twohig for an own goal that gave Blues a 16th-minute lead.

Jo Potter was unlucky not to double the home side's advantage three minutes after the break, the midfielder's 25-yard free-kick thudding against the bar.

But it was 2-0 three minutes later as substitute Eni Aluko set up defender Kerys Harrop to score from close range.

It seemed to be game over when striker Jodie Taylor netted from 15 yards to put Blues three goals up in the 57th minute.

But the Reds fought back and, after striker Emily Gielnik had hit the woodwork, midfielder Kelly Jones pulled a goal back with a 77th-minute header.

The visitors pushed hard in a late bid to save the match, but Birmingham stood firm to retain their unbeaten record, while Liverpool remain second from bottom.

Wales striker Helen Lander bagged a hat-trick for Chelsea after Everton had taken a 24th-minute lead through midfielder Michelle Hinnigan.

Lander equalised on the stroke of half-time, meeting a Dunia Susi cross to score from the edge of the six-yard box.

The striker doubled her tally with a tremendous 74th-minute strike and then volleyed home her hat-trick goal in the final minute.

The Belles twice came from behind but were left pointless after an excellent game in which all of the goalmouth action came in the second half.

Bristol striker Ann-Marie Heatherson hit the bar just after half-time, but midfielder Jess Fishlock then shot the home side into a 53rd-minute lead.

Heatherson restored Academy's lead with a 76th-minute volley and then hit the woodwork once more, this time with an 85th-minute header.

The visitors grabbed their second equaliser in the last minute of normal time as striker Beth England scored direct from a powerfully struck free-kick.