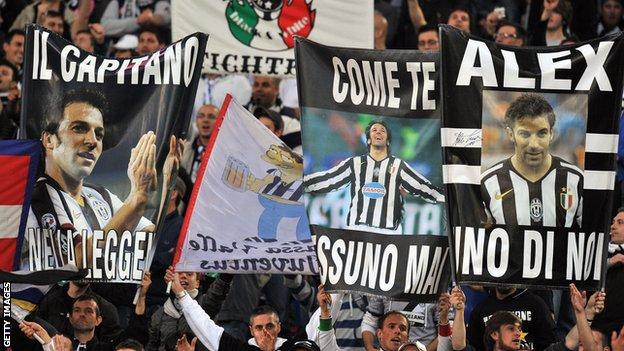 There was no happy ending for Alessandro del Piero as the 37-year-old forward brought the curtain down on an illustrious career at Juventus as they lost the Coppa Italia final.

They went down 2-0 to Napoli at the Stadio Olimpico in Rome.

Del Piero was making his final appearance for the club - almost 19 years after his September 1993 debut.

He went on to make 705 appearances for the club, winning 19 trophies including the World Cup with Italy in 2006.

Del Piero was withdrawn after 68 minutes of the final, to a standing ovation, as fans paid their tributes.

He scored the first of his 289 goals for the club in his second appearance before bagging a hat-trick on his first start back in 1993.

The Italian was also a regular for his country since 1995, making 91 appearances, scoring 27 goals.

Speculation has been mounting over the future of the Conegliano-born striker, since Juventus announced they would not be offering him a new contract.

Arsenal, Tottenham and Queens Park Rangers have all been linked with a summer move for the veteran while MLS side LA Galaxy are the latest team reportedly tracking him.