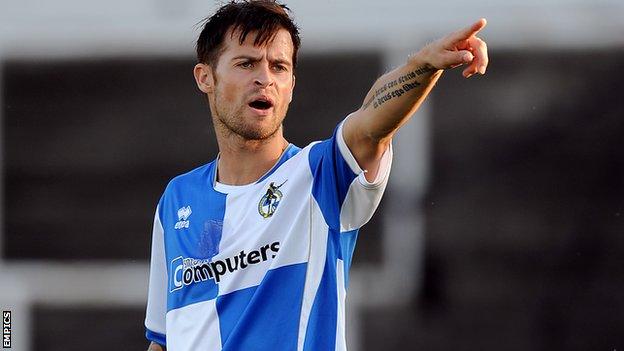 Byron Anthony has hit out at Bristol Rovers boss Mark McGhee following his release by the club after six years.

The defender made 20 appearances before McGhee's arrival in January but was then sent out on loan to Hereford.

"He said he would give everyone an opportunity but he didn't give me the chance to show what I could do.

"He didn't see me play or know me as a player, but I'll take it on the chin and move on," the 27-year-old told BBC Radio Bristol.

Anthony joined Rovers from Cardiff City in 2006 and made 191 appearances for the club in total.

His last game as a Pirates player came against Crawley in January under caretaker-manager Shaun North, who was put in place temporarily after Paul Buckle's dismissal.

A month after McGhee took over at the Memorial Stadium, the former Wales Under-21 international was out to Hereford where he made 15 appearances in the club's failed attempt to secure their Football League status.

Anthony says his focus is now securing a contract for next season.

"I've got my representatives speaking to clubs so hopefully we'll have some news in the coming weeks.

"This situation makes you thicker skinned and a better person. You move on a stronger man," he added.