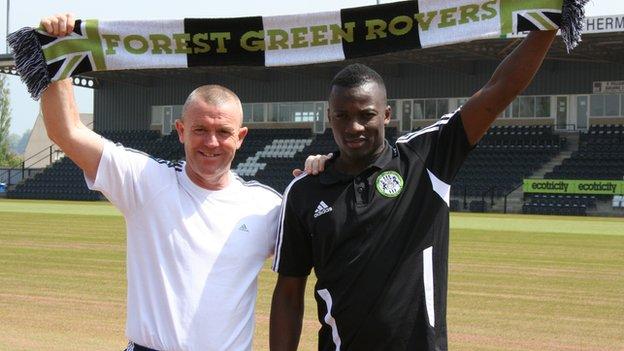 The Gambia international, 22, previously spent two years at Portsmouth under then manager Harry Redknapp and also had a loan spell at Norwich during the 2008-09 season.

He was released by Pompey in 2010 and had been playing in Denmark before joining Forest Green on trial.

"To get this quality of player is a real feather in our cap," manager Dave Hockaday told BBC Gloucestershire.

"He's a very good player and his pedigree will tell you all you need to know about him."

Koroma is the fourth new forward to join Rovers following the arrival of Magno Vieira, Ben Wright and Phil Marsh.

"We're not a big squad but every single member, without exception, I could play on a Saturday," added Hockaday.

"I've got some much faith in all of them. We're not carrying anyone. "