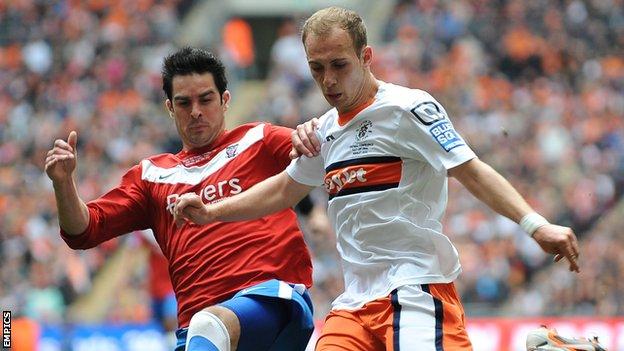 on Sunday consigned the Hatters to a third consecutive year of play-off failure.

"I've said to some of the players we consider this to be the beginning of an era rather than an end," Sweet told BBC Three Counties Radio.

"Next year we've just got to go and win [the league]."

Luton have spent the last three seasons outside the Football League.

In 2010, the Bedfordshire club were beaten by York in the play-off semis and last year they suffered defeat in the final, losing to AFC Wimbledon on penalties.

"It hurts. It's a real test of character now for us to bounce back again and we know we can," said Sweet.

Luton's prospects of even qualifying for the play-offs looked slim when Gary Brabin was sacked as manager in early April, but new boss Paul Buckle was able to win four of his side's last six matches of the regular season to sneak into the top five.

"We've got Paul Buckle in who has really galvanised the team in the last few games," Sweet continued.

"On the day he came in for his interview, nobody would have believed we would be here in a play-off final.

"So in some respects we have to look at this as a bonus but it's not good enough for us."

Meanwhile, Andre Gray, Luton's goalscorer against the Minstermen, has joined the Hatters from Hinckley United on a permanent basis.

He has netted seven times in 12 games since arriving at Kenilworth Road on an initial loan deal in March.