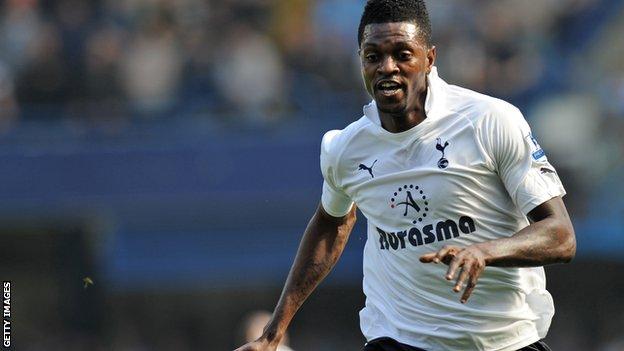 Adebayor has enjoyed a prolific season at the north London club, scoring 18 goals in 37 appearances.

Adebayor said on Twitter: "Loved my spell at Tottenham, we are working hard with the chairman to make it permanent. Will keep you informed!!"

The news that Adebayor is keen to make the move permanent is a huge boost for Harry Redknapp, especially as Tottenham will not be playing Champions League football next season.

Arsene Wenger brought Adebayor into the Premier League from Monaco in 2006, the striker scoring 46 goals in 105 appearances for Arsenal.

He then made a £25m move to Manchester City, scoring 15 goals in 34 appearances.

During his spell at City the Togolese also spent time at Real Madrid under Jose Mourinho, the La Liga side choosing not to sign him on a permanent contract at the end of the 2010-2011 season.

Tottenham signed him from City on a season-long loan last year. Adebayor has been enjoying his football at White Hart Lane, flourishing under Redknapp's managerial style.