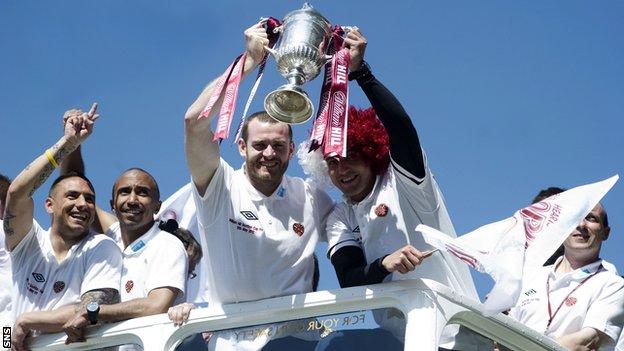 Club legend John Robertson believes Hearts can progress from their Scottish Cup victory, despite losing several of their established stars.

"The team is being broken up," Robertson told BBC Scotland. "The club need to downsize the budget.

"It will be difficult to replace these players but they do have a crop of exciting young lads.

"Yes, it will be a younger squad but Hearts can build on the goodwill factor that winning a cup gives you."

From the team that hammered Edinburgh rivals Hibernian 5-1 to win the Scottish Cup, Ian Black and Stephen Elliott have been released.

Owner Vladimir Romanov has stated his desire to sell the club and aims to fast-track academy prospects into the first team as he scales back his investment.

"Hearts need to bring their budget down to a manageable level," added Robertson.

"There was always going to be sacrifices.

"Skacel once again showed just how important he is with his two goals at Hampden.

"And Ian Black was magnificent on Saturday. He ran the show.

"But Ryan McGowan is a young player who has already broken through and his brother Dylan will be back from loan in Australia.

"Jason Holt and Jamie Walker are other youngsters that are highly thought of."

On Sunday, as Hearts paraded the trophy, Sergio spoke of his frustration and disappointment at not being offered a new contract.

However, managing director David Southern has since indicated that efforts will be made to keep the former Sporting Lisbon manager at Tynecastle for a second season.

"I'm told an offer will be put to him this week and I'm hopeful he will accept it.

"Hearts were knocked out of the League Cup by Ayr United and had a poor season in the league but the Scottish Cup was the catalyst for keeping going."

Wage delays on three consecutive months led players to complain to the Scottish Premier League in December but Robertson saw no sign of disharmony on the field.

"The money troubles seemed to galvanise everybody," he said. "In circumstances like that, you stick together.

"On Saturday, Hearts were a unit, they were together. Hibs looked fractured, disjointed - they didn't gel at all and it told in the result."