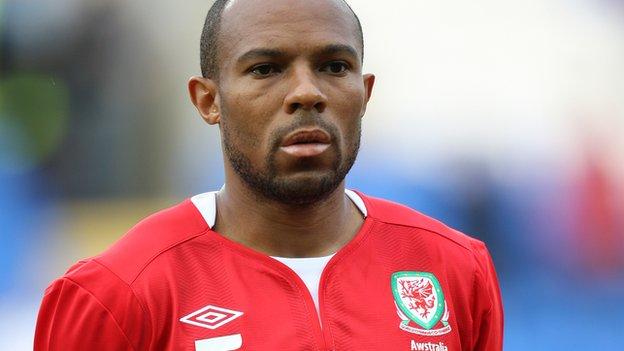 Danny Gabbidon hopes to prolong his international career despite being left out of the Wales squad for Chris Coleman's first match in charge.

The 32-year-old defender faces an uncertain club future after being released by Queens Park Rangers.

But he feels able to continue playing at a high level and wants to add to his 46 Wales caps.

"I want to keep making myself available for Wales but I know I'm not going to play in all the games," he said.

"I'm happy if I can be around the squad and help the younger lads by passing on my experience. When I'm called upon to play then I always try to do my best."

Together with former defensive partner James Collins and striker Rob Earnshaw, Gabbidon was one of three senior players overlooked by Coleman for Wales' friendly with Mexico in New Jersey on 27 May.

At the age I'm getting to now, I don't want to be sitting on the bench

He retired from the international stage in October 2010 only to be persuaded back into the fold by Gary Speed a few months later.

Gabbidon made his first Wales appearance in six games in February as a second-half substitute in the 1-0 home defeat to Costa Rica, a match held in memory of former manager Speed, who died in November 2011.

Coleman has used the friendly with Mexico as an opportunity to select a few inexperienced players, a decision with which Gabbidon has no issue.

"A few of the older players have not been selected and he [Coleman] rang me to say he wanted to have a look at a few of the younger players. I understood everything he was saying," he said.

"But he said he still wants me to be involved with my experience going into the next qualifying campaign and I'm happy to do that."

Gabbidon joined seven other players in leaving QPR on Monday as his one-year contract came to an end.

After featuring regularly under former manager Neil Warnock, Gabbidon made only two appearances under Mark Hughes and knew his time at Loftus Road would not be extended.

"It's not really a surprise for me," he told BBC Wales Sport. "I'm just happy the club were able to stay in the Premier League and hopefully they can push on and do a bit better next season."

As for the future, Gabbidon says he hopes to find the right balance between playing regularly for a new club while staying at a high level.

"I still feel I can play at a good level and that's one of the aims," said Gabbidon, who has previously said he wants to play again for Cardiff City before his career ends.

"But obviously at the age I'm getting to now, I don't want to be sitting on the bench. I want to play as many games as I can in the next few years before I finish playing."